UNT and InspectIR join forces in the war on drugs 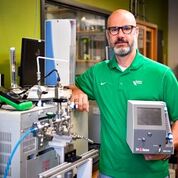 University of North Texas College of Science chemistry professor Guido Verbeck and InspectIR Systems LLC are collaborating to commercialize a system for detecting drugs by analyzing a person’s breath.

“Using a mini mass spectrometer and special filters, my device can detect and identify chemical molecules in a gas,” Verbeck said. “That means it can literally smell and identify substances on your breath. Right now, I am working with John Redmond and Tim Wing, founders of InspectIR, on a breathalyzer for commercial release that will detect any number of drugs.”

“With opioid abuse at an all-time high, it is imperative to get a device on the market that can detect drug use on the spot,” said Redmond.

“It is especially important to be able to test people such as bus drivers, pilots and people who work heavy machinery.”  Wing added, “Imagine the number of lives that could be saved if employees were tested prior to beginning work in a hazardous environment. The breathalyzer would allow companies to turn away workers under the influence.”

The breathalyzer is about to enter the market and will initially test for tetrahydrocannabinol or THC, the principal psychoactive constituent of cannabis.

“Right now, the law enforcement community needs a simple way to identify people driving under the influence of THC without waiting for laboratory analysis of saliva, blood, or urine,” Verbeck said. “The chemical markers of marijuana do not remain in the blood long. A field test is needed to produce an accurate result.”

“We are based in Frisco, Texas, so UNT’s new campus here will allow InspectIR and Dr. Verbeck to engage in a working relationship and collaboration for more expedient research, design and development,” said Redmond. “From our initial conversations, to the white paper and several prototype devices, the timeline is more like commercial development than what many assume takes place in an academic environment.”

Verbeck became involved with the war on drugs in 2016 when he developed a system that could locate certain chemical molecules in the air. The chemicals detected are specific to those used to create methamphetamines. Essentially, Verbeck invented the world’s first mechanical drug-sniffing “dog.” The “dog” could be installed in a car, which would then cruise an area. The more molecules detected in the air the closer the “dog” was to finding the chemicals needed to make methamphetamines. Operators could just follow the “dog’s” nose to the source.

InspectIR Systems LLC based in Frisco, TX, is an innovator in the development, commercialization and application of multispectral non-contact validation, inspection and profiling technologies/devices. For more information on InspectIR Systems, visit www.inspect-ir.com.