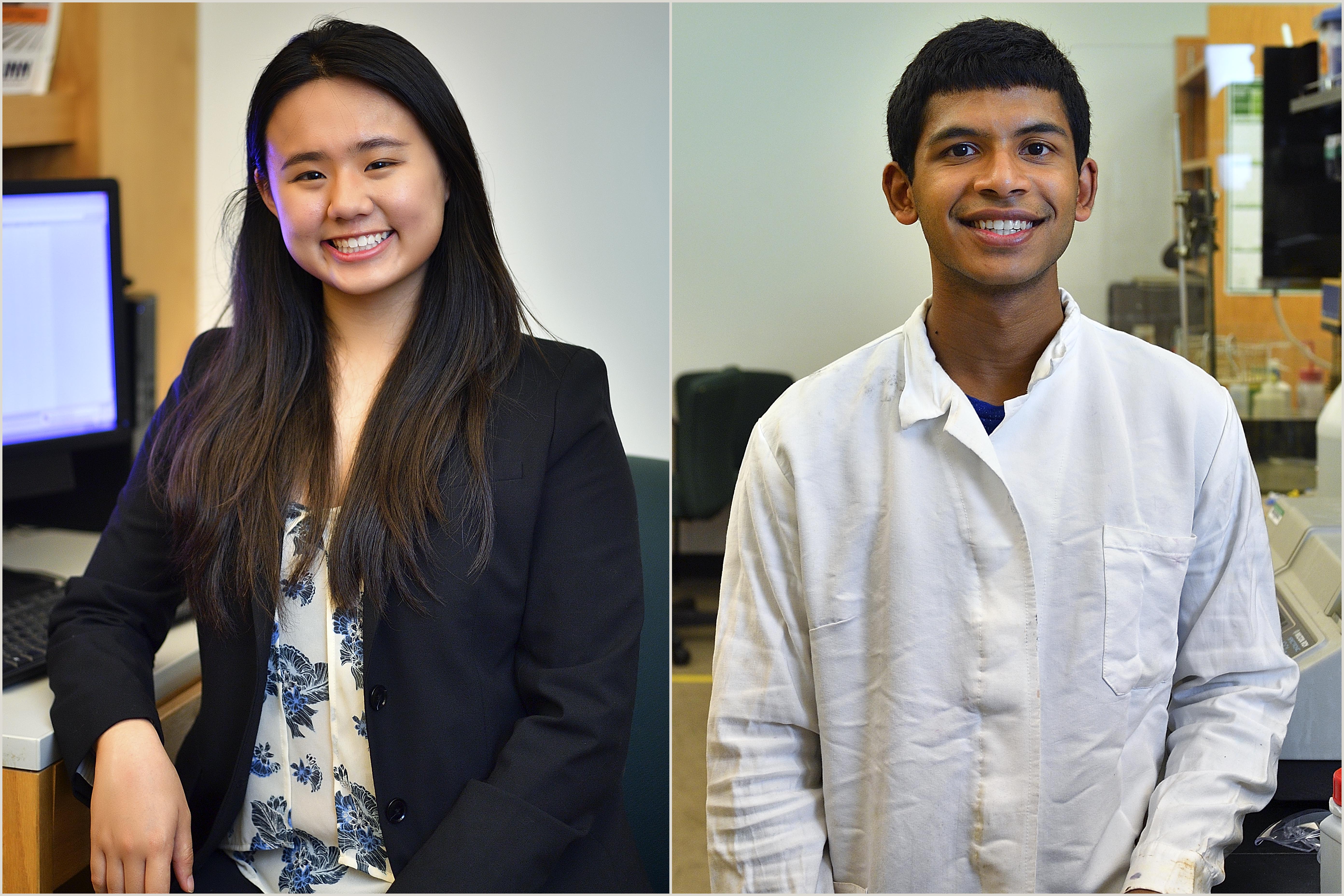 DENTON, Texas (UNT) — Amber Lu, a student from the Texas Academy of Mathematics and Science at the University of North Texas has been named a 2017 Barry M. Goldwater Scholarship Winner.

“It’s a really humbling experience,” said Lu. “It could have easily been any of the other nominees. Being surrounded by these peers is amazing, they are all doing such amazing research and they just make me want to do better.”

Lu, a 16-year-old from Sugar Land, has been working on research at UNT with chemistry professor William Acree to find the best way to purify fossil fuels. She was named a Siemens Semifinalist in 2016 for that research. In 2015, she also was a Siemens Semifinalist for a project where she worked to optimize data transfer and integrated circuit design and made a presentation on that subject before the Mathematics Association of America MathFest Conference. Lu has already co-authored two publications.

Prateek Kalakuntla, a TAMS student, was named an honorable mention recipient. He has conducted research alongside Mohammad Omary, professor of Chemistry. Kalakuntla, an 18-year-old from Plano, has solved many issues that current mercury sensors face and developed a low-cost, easy to use test to reveal mercury and other toxic heavy metals in water.

Kalakuntla’s research resulted in his placing fourth and winning a $30,000 scholarship in the 2016 Siemens Competition in Math, Science and Technology. He presented his research at the Texas Undergraduate Research Day at the Capitol, held March 28, and will present it at the American Association for the Advancement of the Sciences meeting in San Diego April 22.

Kalakuntla said he was already working in Omary’s laboratory when he learned about the Goldwater competition.

“Entering the competition was a spring point for me learning how to write about and present my research,” he said. “Being named an Honorable Mention means a lot to me.”

After graduating from TAMS on May 11, Kalakuntla will attend the Massachusetts Institute of Technology and major in bioengineering.

UNT has produced 60 Goldwater Scholars since 1996, leading all Texas Universities. Goldwater awards are considered to be among the country's most prestigious scholarships awarded to students planning careers in mathematics, science and engineering. Scholarships of up to $7,500 a year are provided to help cover costs associated with tuition, fees, books, room and board. Students are chosen on the basis of their scientific research, grade point averages and other achievements.

Lu credits much of her research success to attending TAMS. She graduates this spring and is currently deciding between 10 collages that have accepted her. She plans to major in applied mathematics and eventually work her way up to a doctoral degree with a goal of attaining a career as a research professor.

“I think TAMS is the best decision I’ve ever made,” she said. “There is so much independence to create your own learning plan. It’s also not competitive, instead it’s about being collaborative and helping each other. TAMS has just been the best experience and I wouldn’t trade it for the world.”

UNT's Texas Academy of Mathematics and Science is the nation's first accelerated residential program for gifted high schoolers, allowing them to come to UNT to start their first two years of college early. Mentored by faculty at UNT, TAMS students tackle complex, real-world problems, working on solutions and breakthroughs in fields ranging from healthcare to energy consumption. TAMS is an important pipeline for STEM education, nurturing the next generation of innovators, and the program is one of the many ways UNT advances science, engineering and technology.