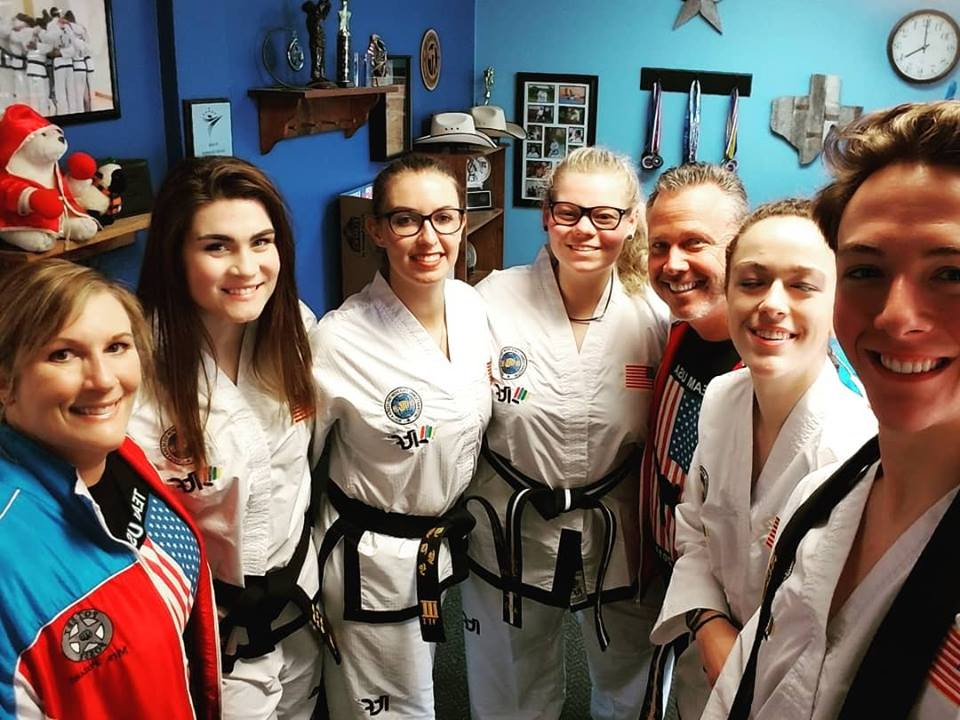 Jamie Raybourn and Lillian Randall, pictured second and third from the left (respectively), are shown with a coach and teammates

“It’s a lot to juggle,” said Raybourn, who like Randall, has a part-time job on campus. “We’ve had a training or competition every weekend since spring break.”

The UNT juniors also make time to train both locally and at their facility, Poteet Martial Arts, in Midlothian, Texas. Every Tuesday, they drive three hours, roundtrip, to their hometown. While there, they spend another three hours working Taekwon-Do techniques like breaking and sparring.

“It’s exhausting but 100 percent worthwhile,” said Randall, who’s majoring in linguistics. “I’m more productive when I’m in training mode. It puts me in a mindset that I’ve got to get all this stuff done, so I’m just going to get it done.”

Getting it done also includes pushing their bodies to the max. In one competition, Raybourn went 32 rounds, fractured her right foot and broke more than 150 boards.

“She was breaking her body because in her mind, she was already a winner,” said Randall, who watched her teammate from the sidelines. It was the 2017 World Taekwon-Do Competition in Ireland, and board after broken board, Raybourn would not give up.

“We were just waiting for Jamie to win it,” Randall added. “Jamie would break with her hand, and then we’d put some ice on it. Then she’d break with her foot, and we’d ice that. She was a breaking machine. It was beautiful to watch.”

The pair leave April 19 for Germany. It’ll be Randall’s second world contest and Raybourn’s fourth, all hosted through the International Taekwon-Do Federation.

“It gets to that point when you’re about three weeks out and you’ve been doing this rigorous routine for the past six months,” said Raybourn. “You’re exhausted emotionally, physically and spiritually, but you can’t stop. For me personally, I know I can do it, so why would I sell myself short?”