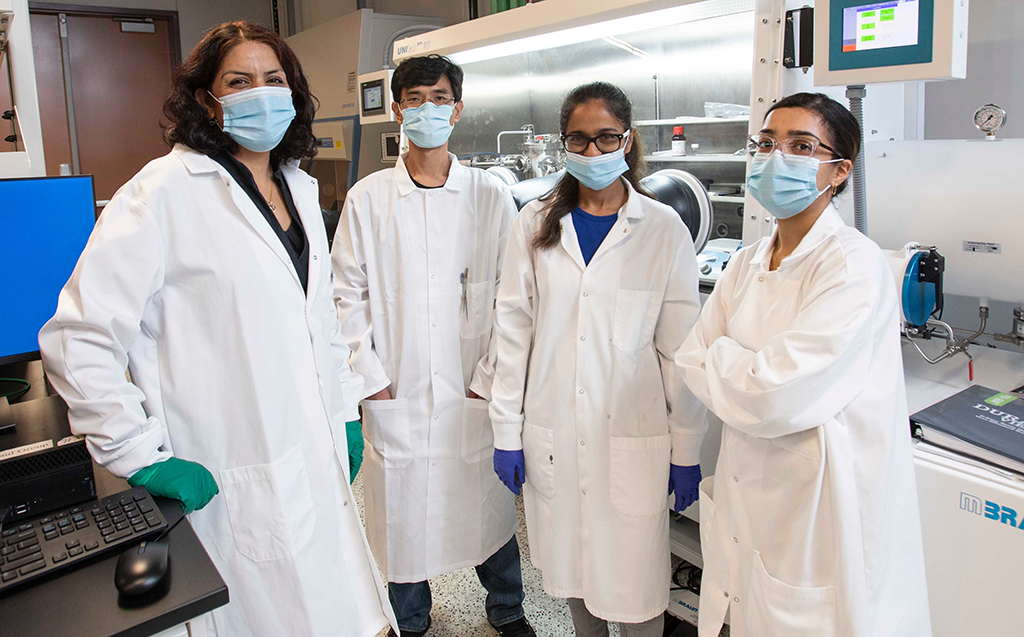 Anupama Kaul, PACCAR Professor of Engineering from the Departments of Materials Science and Engineering and Electrical Engineering, has successfully used additive manufacturing to print inks of 2D perovskites, which are highly complex molecules that absorb incoming light extremely well. Given that the perovskite family of materials are superb light absorbers, it’s no surprise they are used for solar cells.

Kaul’s research group, the Nanoscale Materials and Devices Laboratory, is an international leader in 2D materials and their current efforts involve integrating 2D materials with perovskites for sensors and solar cells. These devices hinge upon mechanisms that effectively convert incoming light to electricity, where the electrical contacts play a critical role in collecting as many of the photogenerated carriers within the perovskite absorber layer as possible. Kaul’s team has successfully demonstrated that additive manufacturing is feasible to not only inkjet print the 2D perovskites themselves, but also the electrical contacts with 2D graphene and silver inks.

The research was funded last year with a $474,000 three-year grant by the Office of Naval Research, under the Department of Defense. The current findings have been published in Nature npj 2D Materials and Applications.

“Traditionally, 3D perovskites have been used for solar cells, but they can be fairly unstable, given their propensity for moisture and oxygen,” said Kaul, who also serves as the director of the PACCAR Technology Institute. “So, our team is addressing those instability issues by leveraging the use of 2D perovskites, which are intrinsically more stable and can also be formed in flexible platforms with additive manufacturing techniques.”

By using ink jet printing to first demonstrate photodetectors, Kaul’s team will use this knowledge to develop flexible solar cells at a lower cost with additive manufacturing compared to traditional methods that require sophisticated and expensive equipment. The researchers manufactured and tested 2D graphene and silver inks to collect the photogenerated charges after the incoming light was absorbed by the 2D perovskites.

“Ink jet printing the electrical contacts to 2D perovskites is not easy since we need to constrain the curing temperature for densifying the films, so the underlying 2D perovskite film does not degrade. As a result, lower boiling point solvents were used, but this is very challenging since the nozzles in the printer clog up easily. This issue really required us to think about how we could engineer the process so that we would get the right parameters and results we were hoping for with the 2D perovskites,” Kaul said. “We found that we were able to create everything through additive manufacturing and demonstrated printed photodetectors on flexible and bendable substrates.”

Next steps for the researchers include using the 2D perovskite materials in a photovoltaics platform.

“The exciting thing about this research is that it really is a stepping stone to all additively manufactured solar cells for the Navy and the Marine Corps,” she said. “Once this capability is realized for solar cells, it could change the way the Navy collects and uses electricity toward lightweight photovoltaics in airborne applications, such as ocean-going drones or on aircraft carriers.”