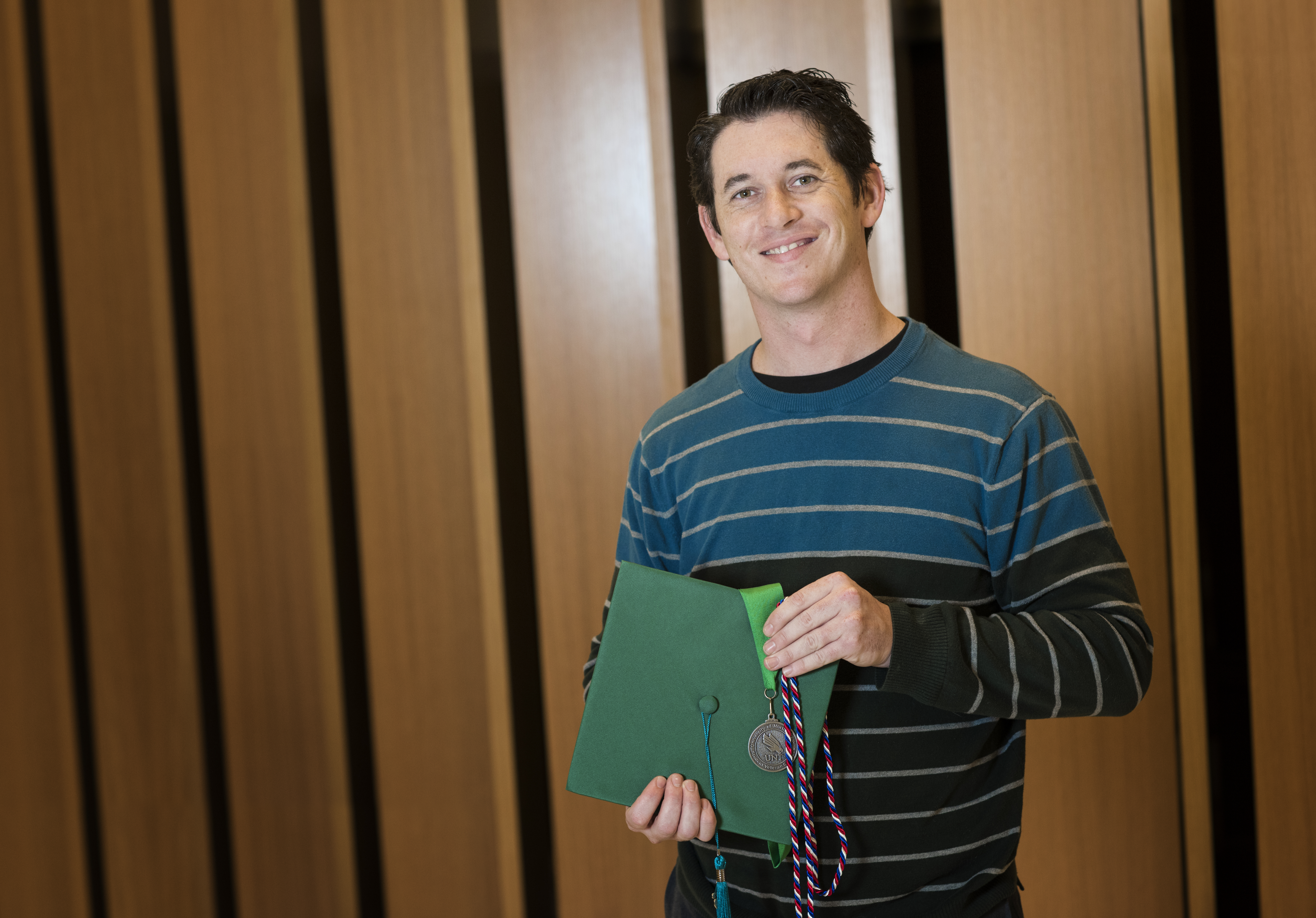 Johnathan Igou photographed a day before he graduates from UNT, December 16.

DENTON, Texas (UNT) — University of North Texas senior Johnathan Igou says the military is in his blood. Part of a military family dating back three generations, Igou planned for a career in the Air Force and started taking distance learning classes in order to further his education. However, those hopes were dashed when he was medically discharged in 2008 following an injury in Afghanistan. Along with it went his plans to complete his bachelor’s degree – until his wife suggested he go back to school.

“I was hesitant because I knew I’d be doing something that no one in my family had ever done,” said Igou, who will be the first in his family to graduate with a four-year degree when he is awarded a bachelor of applied arts and sciences degree with a specialization in logistical operations this December. Igou’s degree also will make him among the first students to finish with the logistical operations focus.

Igou, a father of two who commutes from Keller, said his first degree choice was always related to logistics – the science of getting goods from where they are to where they need to be. In the Air Force, he began in transportation, one of the most basic levels of logistics. Later he was promoted into warehousing, and he eventually went into dispatch operations as a senior airman.

After his wife’s encouragement, he enrolled at Tarrant County College’s logistics and supply chain management program near his home; however, he knew he’d have to transfer to a four-year university to finish his bachelor’s degree.

At TCC, program coordinator Mike Esquivel suggested UNT’s bachelor of applied arts and sciences program. The degree offers multiple specializations, including a focus in logistical operations that would allow Igou to take courses through UNT’s nationally-ranked logistics and supply chain program. Additionally, the program would accept credits from TCC, as well as course credit Igou earned as part of his educational training in the service.

“A lot of programs at major universities don’t count those credits. Believe it or not, it happens more than you think. A lot of online campuses with distance learning would offer classes, but I had no idea to check whether those were accredited schools,” he said.

Trey Anderson, an assistant director of student services in UNT’s College of Public Affairs and Community College, which houses the degree, said the program is a good fit for both community college students, along with veterans and active duty military service members to finish their civilian education.

“We’re at the right place in the right time for a lot of these students,” said Anderson. “This degree program is designed for specific students to give them real credit for the educational expertise they’ve already acquired. For some, it’s the difference between finishing a degree in three years versus four – or giving up altogether. It’s getting students where they are supposed to be degree-wise.”

Now, with graduation a few weeks away, Igou said that he finally feels ready for his unexpected career path.

“It took me a while to adapt, but then this program came through. It was like, ‘This is what I’m supposed to do,” Igou said.