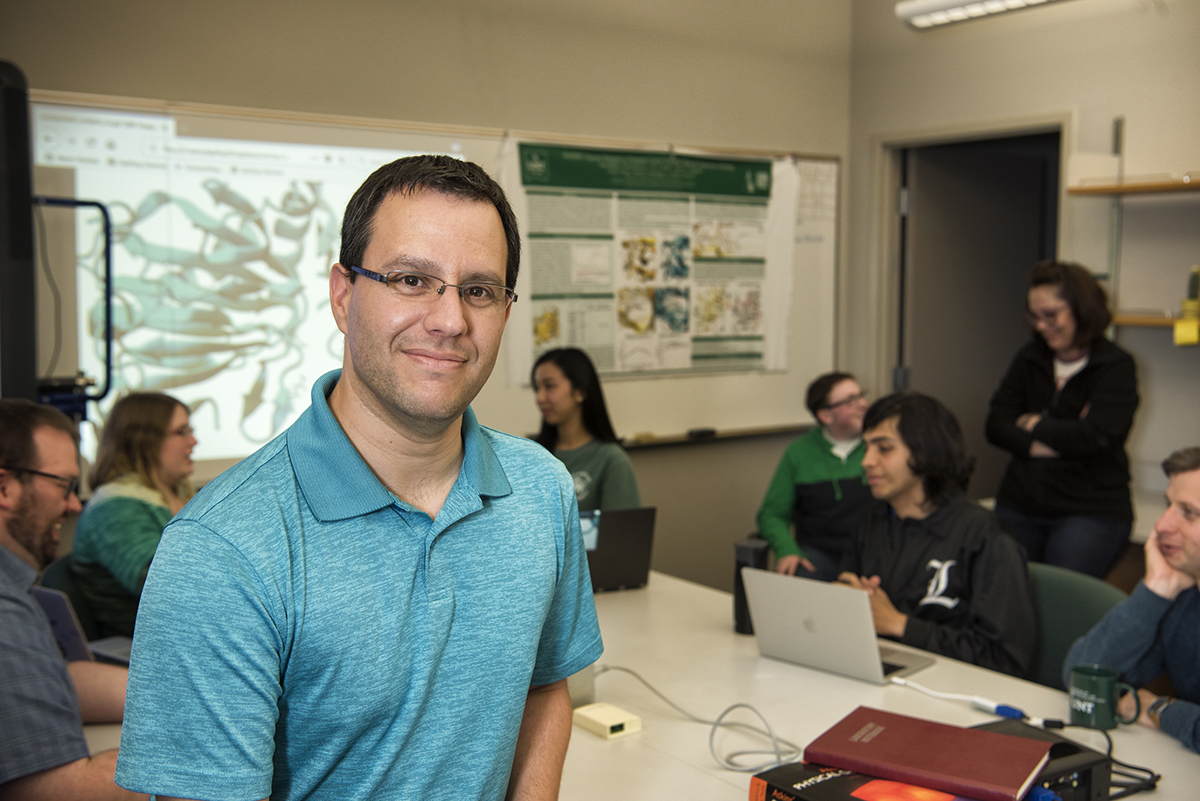 UNT professor G. Andrés Cisneros with his students prior to the COVID-19 pandemic that mostly closed the campus in Spring 2020.

University of North Texas professor and computational chemist G. Andrés Cisneros, along with his research group, are running computer simulations using four U.S. supercomputers, including the world’s most powerful, Summit, at the Oak Ridge National Lab in Tennessee, to investigate inhibitor mechanisms of existing drugs and provide insights that could serve to improve treatment options for COVID-19.

Cisneros’ group, in collaboration with a team of scientists from both France and two other institutions in the United States, are investigating specific inhibitors for two proteins: the RNA dependent RNA polymerase (RDRP) and the main protease (MPro) that could slow or stop the COVID-19 virus as a therapeutic treatment.

“We are looking at Remdesivir and several other drug leads to see how these protein inhibitors are useful in the fight against COVID-19,” Cisneros said. “Protein inhibitors can be used to prevent viruses and bacteria from reproducing and we plan on examining the interaction between the inhibitors and specific proteins in the virus, and their reaction mechanism at the atomic level, something that can’t be done in a traditional lab.”

Cisneros, the principal investigator on this project, said his research group is using the supercomputers to run simulations at a rate of at least four times faster than with UNT's available systems for one simulation, and with higher throughput."

“Since the stay-at-home policy took effect, I’ve been meeting with my research team and other colleagues online and, one day, I told them I was determined to do something to help,” he said. “After seeing a tweet that featured one of the virus’s protein structure, I realized there might be a way.”

Cisneros and his group are experts in DNA polymerases and one of the protein structures that has been recently reported from COVID-19 is RDRP, which is targeted by remdesivir. For the main protease, a world-wide consortium has been working on developing a large variety of inhibitors.

Once Cisneros and the research group realized protein structures from the virus were available, they came up with the idea for the simulation and applied for a grant from the COVID-19 High Performance Computing Consortium. It only took the consortium three days to realize the potential of the team’s project. They were granted 500,000 hours of supercomputer time at national labs, and were awarded $250,000 in credit to run simulations on Microsoft’s Azure.

The consortium consists of federal, industry and academic leaders who work together to provide researchers some of the world’s fastest high-performance computing resources in support of COVID-19 research.