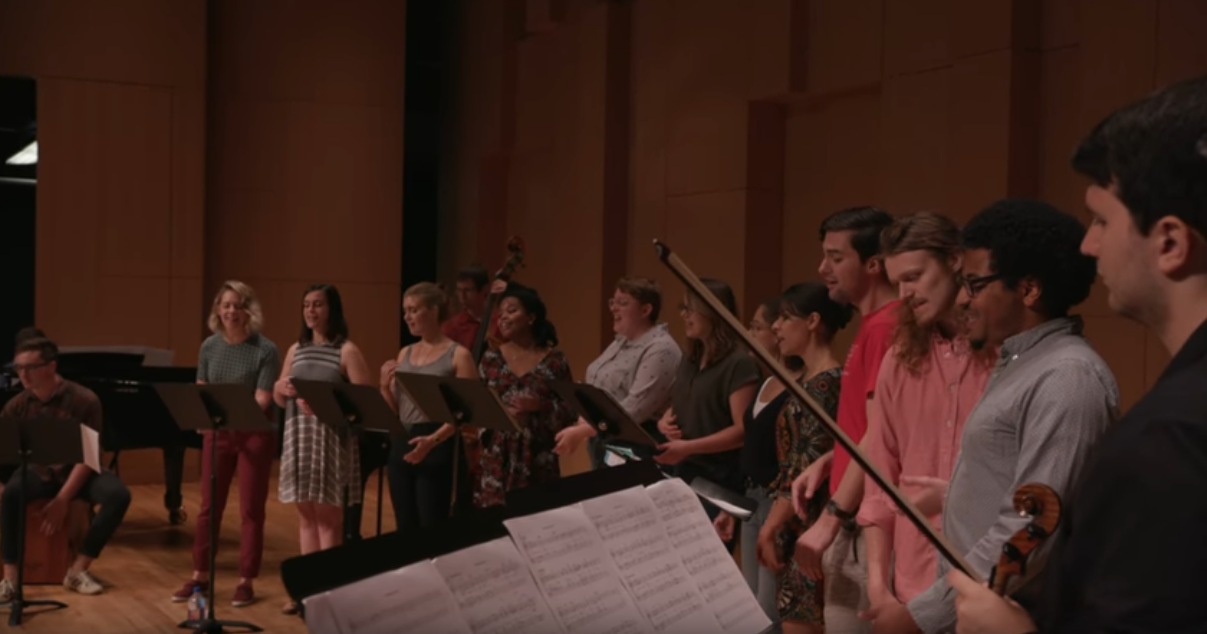 DENTON (UNT), Texas - At the request of the Consul General of India in Houston, TX, the University of North Texas College of Music has produced and released an original arrangement and music video to commemorate the 150th anniversary of Mahatma Gandhi’s birth.

“Gandhi has influenced and inspired the world through his example of peace and nonviolence,” said UNT President Neal Smatresk. “This has been a tremendous opportunity for our UNT College of Music students to be part of the global celebration of his legacy.”

The Consul General of India, Anupam Ray, asked if the UNT College of Music could create an original arrangement of one of Gandhi’s favorite Indian devotional hymns as part of the anniversary celebration. The College had less than four weeks to write, record and produce the piece, maintaining its original melody and text while adding the unique signature sound of the College of Music.

The request came in August, 2018 before the start of the fall semester.

“I knew that if anyone could make this happen, it was the outstanding faculty and students at our College of Music,” said John W. Richmond, dean of the College of Music.

Virani is a cultural researcher with performance and teaching experience in North Indian devotional music and regularly performs spiritual songs in a mix of traditional and contemporary styles. As a child, he grew up singing and hearing the hymn chosen for the project.

“This was an incredible opportunity to reimagine this song in a uniquely UNT jazz-style arrangement,” Virani said. “It was very touching to me because it connected my cultural and religious upbringing with the work I do here at the College of Music.”

Eckert teaches vocal jazz and songwriting and is also internationally recognized as a live and studio vocalist, songwriter and arranger.

The hymn is based on a 15th-century poem by Narsi Mehta who is one of many religious devotional Bhakti poet-saints whose poetry was written in the language of the common people of the region, Gujarati. Gandhi was born and raised in Gujarat, India and the hymn was one of many he heard growing up. The hymn’s chorus, “A true person of God understands the suffering of the downtrodden,” undoubtedly resonated with Gandhi’s deep-felt beliefs and the hymn became one of his favorites. He used it often in public gatherings and political rallies and it has been associated with him ever since.

Eckert and Virani worked together to create an arrangement that is true to the hymn’s cultural style, while adding elements that make it unique to the jazz style of the College of Music.

Manjira (finger symbols) and the tabla (North Indian drum) are essential to the piece’s identity as an Indian devotional piece. Piano and double bass add a full sense of the jazz sound and a cajón (Peruvian box-shaped drum) compliments the rhythm of the tabla. Soloists in flute and violin provide a rich tonal quality that endures in an Indian style.

Eckert and Virani worked together to arrange the piece. Virani provided a melodic and rhythmic arrangement of the song and instrumental solos and Eckert re-harmonized and arranged the piece for the vocalists. The project was particularly challenging since neither Virani nor Eckert nor any of the students speak Gujarati.

“I got a translation of each line of text,” Eckert said. “Even though Dr. Virani does not speak Gujarati, he grew up with the hymn and had performed the piece before. I listened and recorded him as he sang, learning the diction line-by-line.”

College of Music videographer Jordan Bailey recorded the session that was to become the music video. The vocal tracks were sent to College of Music alumnus Zach Yaholkovsky for some preliminary vocal edits to help Nagella meet the quick deadline, and the project was mixed by Nagella the next evening to complete the project on time.

“This remarkable collaboration made something happen that no one could have imagined individually,” Richmond said. “Not only was a wonderful piece of music forged, but wonderful friendships, as well.”

The original arrangement can be streamed or downloaded from numerous platforms including:

The College of Music is one of the nation’s largest and most respected comprehensive music schools. It offers fully accredited degrees from the bachelor to doctoral levels and is home to the world’s first jazz studies degree program. Faculty include internationally acclaimed artists and scholars in composition, conducting, ethnomusicology, music education, music entrepreneurship, music history, music theory performance and performing arts health. The college presents more than 1,100 concerts and recitals annually. UNT music alumni can be found around the globe in impressive, award-winning careers across a wide-range of music professions. Visit the College of Music online calendar http://music.unt.edu and connect with the College of Music on Facebook at Facebook.com/UNTCollegeofMusic, and on Twitter at @UNTCoM