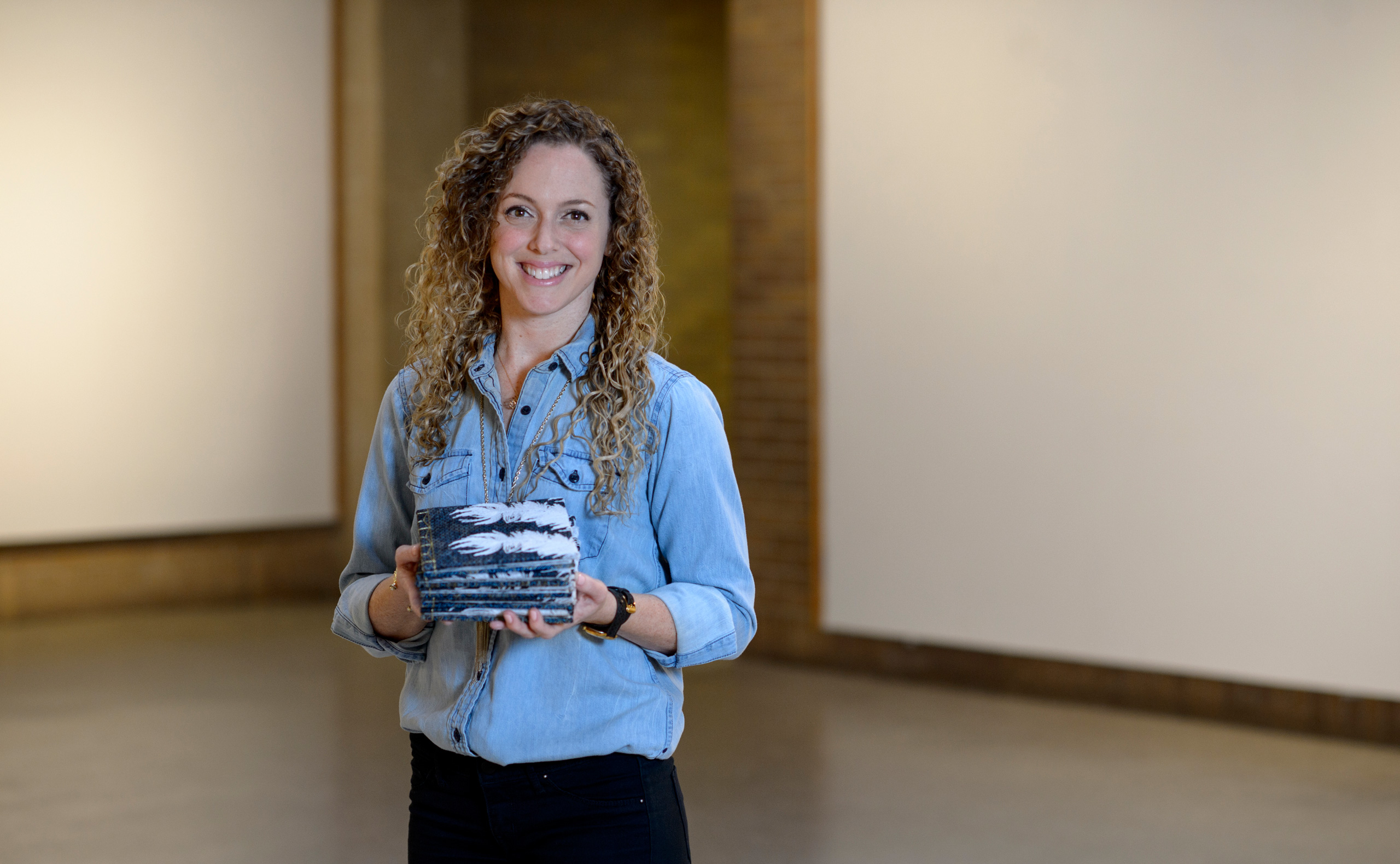 Joy Ellis shows the book, which depicts the plight of Iraqi women, she made at the University of North Texas art class. Photo by Ahna Hubnik.

DENTON (UNT), Texas - A project in a University of North Texas graduate art class depicts the plight of three generations of Kurds who have lived under the Saddam Hussein regime and, now, ISIS.

Joy Ellis, who took a class in the College of Visual Arts during the fall 2015 semester, made an intricately detailed book featuring the stories of the Kurdish family from Iraq who were refugees in Iran. She got the stories from her sister who lives in Iraq with her husband, a worker for a non-governmental organization there.

“I think an important part of art is activism,” Ellis said. “As an artist, I have a strong conviction to do good in the world.”

The project came from the Topics in Latin American Art class taught by Kelly Donahue-Wallace, professor of art education and art history. Students were assigned to find an issue or object that would inspire them to create their own work of art.

Ellis was looking at a codex by an early 17th century Peruvian artist named Felipe Guaman Poma de Ayala, who used the Western book form to communicate his concerns – including reports of abuse – to the Spanish king.

Ellis always had an interest in bookmaking and wanted to focus on a group facing oppression.

Ellis’ sister, who goes by the Kurdish name Nergiz Bidi in Iraq, agreed to interview a family that lives in her neighborhood in the Kurdish region of northern Iraq.

The book, called “The Chronicle of Duski Zhuri Women,” features a cover made of teal brocade that is similar to what Kurdish women often traditionally wear. A gold thread – chosen because gold is significant to a woman’s dowry – runs through the Oriental stab binding.

The book opens with a piece of lace, which women in that area often use as their head coverings. Lace also the divides the three chapters devoted to each woman.

The pages, made of transparent vellum paper, show each woman’s story in English and then in Kurdish in Arabic script, followed by a portrait. All three of them were photographed in a garden or near flowering trees – the oldest woman holding her prayer beads with her tea service in the foreground; her daughter’s hands holding flowers, not revealing her face to maintain her modesty; and the 23-year-old sitting with the trees in the background.

The two older women both survived the Saddam Hussein regime, who was trying to exterminate Kurdish people in Iraq. They fled to Iran to survive. The youngest woman’s story focuses on the present, as she worries that ISIS is approaching her village while she’s studying for her exams and her father is out fighting in the Kurdish military.

Ellis’ sister was struck by the women’s words. They went without food and water for 10 days as they spent 20 days trying to find a place to live until the Kurdish area took them in. They helped bury 70 people in one day.

Ellis said she enjoys bookmaking, but the project has special meaning for her.

“It felt like it was something important,” she said. “I think I just really wanted to get it right and do it justice.”

The activism is a characteristic the sisters got from their parents, who have been lifelong missionaries and currently live in Liberia. Ellis hopes to make a similar book with the women her mother is working with.

Ellis, who lives in Fort Worth, will graduate from Texas Woman’s University in spring 2017. She works in different forms of art, including photography and painting, and hopes to teach in the future.