UNT students Brooke Otten (front) and Kortney Melancon have been credited with the discovery of a new chemical bond which will forever carry their names. The Otten-Melancon bond is a fundamental find that shows two supposedly inert metals, gold and copper, interacting at the subatomic level. 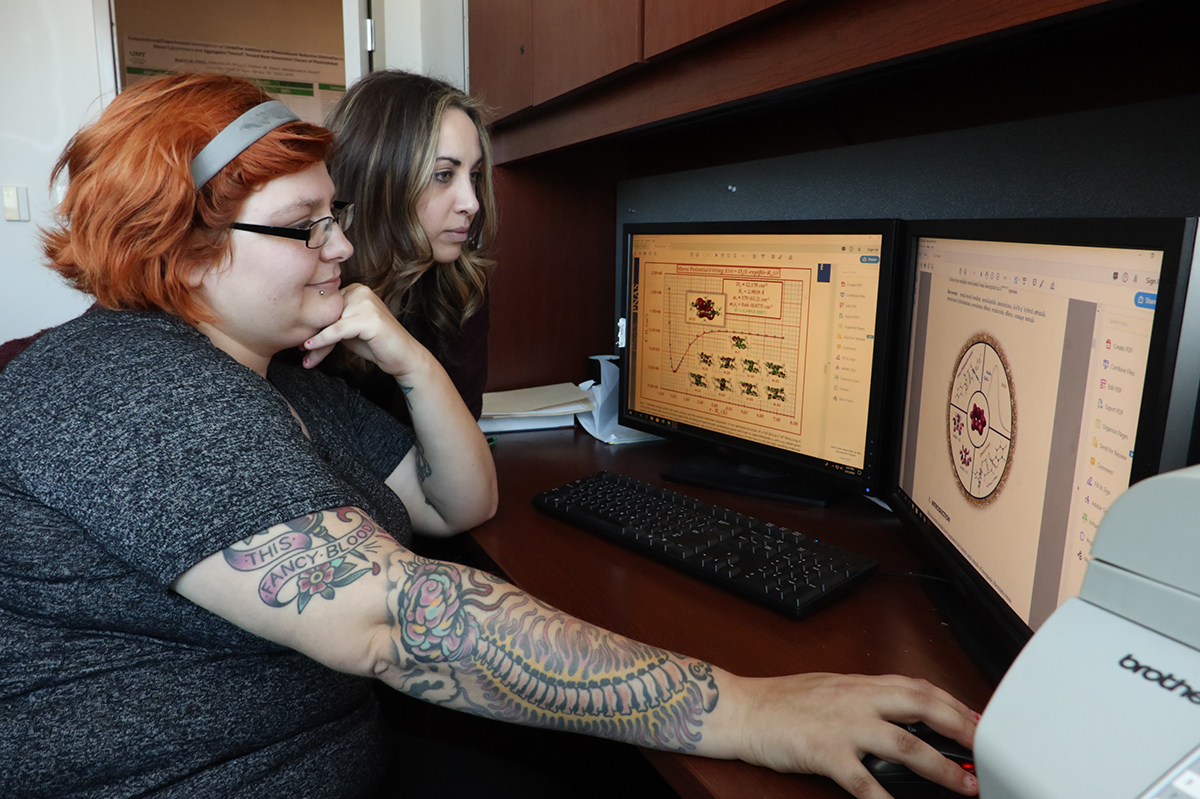 University of North Texas chemistry students Kortney Melancon and Brooke Otten have been credited with the discovery of a new chemical bond, which will forever carry their names.

The Otten-Melancon bond is a fundamental find that shows two supposedly inert metals, gold and copper, interacting at the subatomic level.

“Gold and copper are closed-shell metals. Unlike many metal atoms, they don’t adopt or give up electrons. They have “shells” of electrons that stay in place. This means they are very stable and generally don’t interact with other stable atoms. What happened in our experiment wasn’t supposed to happen,” said Otten a graduating Ph.D. student in the College of Science.

Melancon and Otten were studying the potential interaction between two different metal atom complexes (heterobimetallic) to determine if they would interact. As a comparison, the students used a homobimetallic (two of the same metal atom complexes) as a control group. The control group was known to not interact and considered stable. These models were investigated with computational chemistry.

“In terms of our expected outcome, this was an accident,” said Melancon, also a  graduate student in the College of Science. “The metal-metal interactions in the homobimetallic complex, the supposedly stable control group, actually exhibited some interaction.”

In fact, Melancon said that she and Otten, ran the computational experiment a number of times taking a variety of approaches to make sure there wasn’t some mistake. Despite the attempts and different angles of approach, the results remained the same. Once they were certain that they had discovered something new, they took the results to their professor, Mohammad Omary, who promptly told them to run the experiment again.

“One of my professors once told me, ‘A good scientist never trusts a positive result,’” Melancon said. “It took us a long time of reviewing the data and analysis before we all believed what we were seeing.”

While this discovery is of a more theoretical interest to chemists, there can be some practical applications. Under UV light, these new metal complexes will phosphoresce at room temperature. This could be useful in the production of light-emitting materials such as organic LEDs.

Melancon, Otten and Omary published their previous work on heterobimetallic closed-shell covalent bonding, All That Glitters Is Not Gold: A Computational Study of Covalent vs Metallophilic Bonding in Bimetallic Complexes of d10 Metal Centers—A Tribute to Al Cotton on the Tenth Anniversary of His Passing, in the “Comments on Inorganic Chemistry” journal.