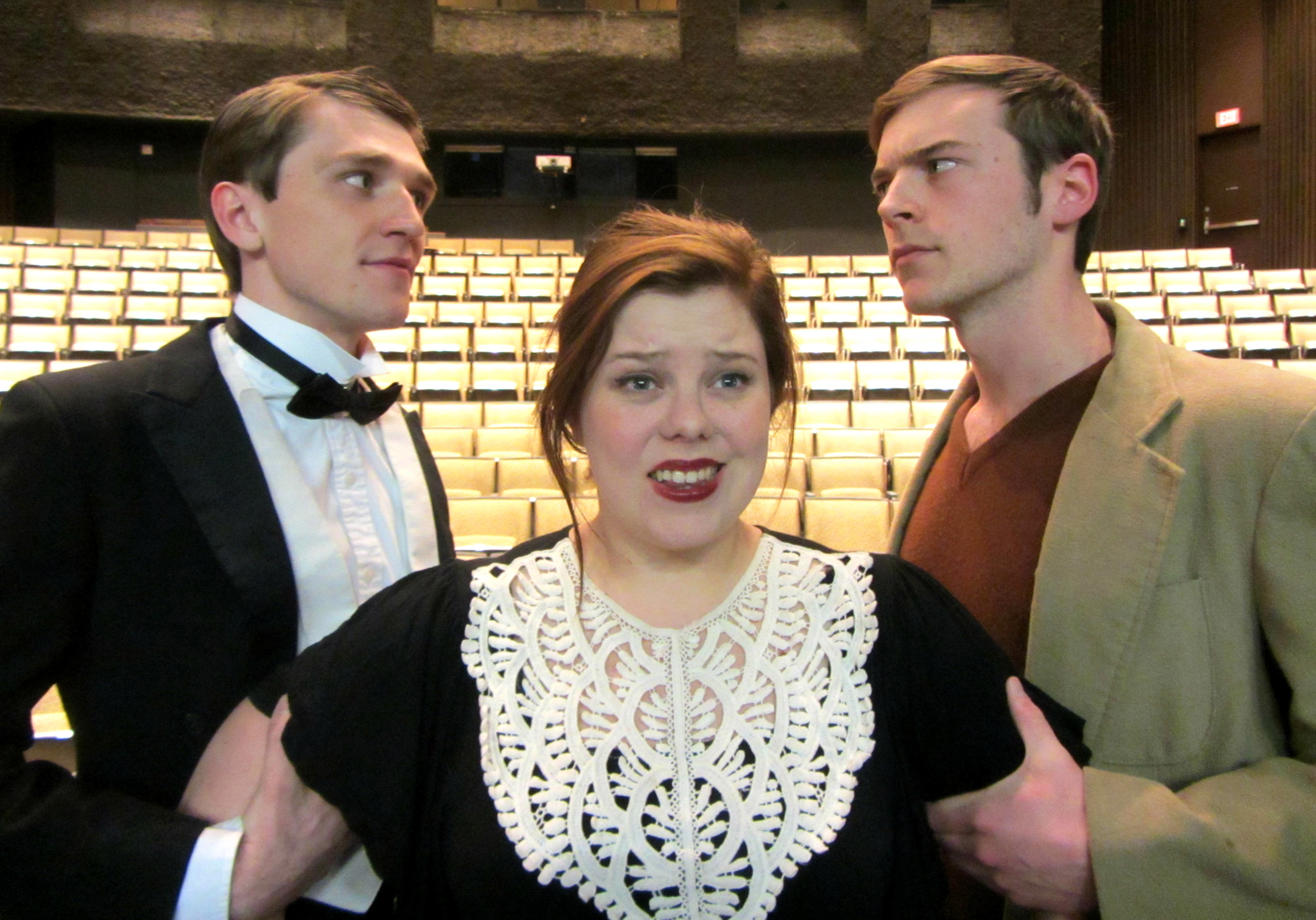 The Department of Dance and Theatre at the University of North Texas will present Stage Kiss, a smart comedy about two ex-lovers who are reunited when hired to act in a play. From left to right, Chris Taylor as "He," Shayleigh Ward as "She" and Caddo Lindsey as the husband.

What: Stage Kiss, a smart comedy about two ex-lovers who are reunited when hired to act in a play, presented by the Department of Dance and Theatre at the University of North Texas. The play is written by MacArthur Fellow Sarah Ruhl and directed by Marjorie Hayes, UNT's managing director of theater production and associate professor of acting-directing.

Cost: Tickets cost $7.50 for students, UNT faculty/staff and senior citizens and $10 for adults. Audience members can purchase tickets at the box office, which is open from 1 to 5 p.m. Monday-Friday and one hour before each performance at the Radio Television Film and Performing Arts Building. For more information, call 940-565-2428, email dat-boxoffice@unt.edu or visit the Department of Dance and Theatre online.

Parking: Parking is free directly behind the RTFP Building Friday through Sunday. For more information about parking on the UNT campus please visit: UNT Parking and Transportation online.

What else: The play contains strong language and adult content.

DENTON (UNT), Texas -- Imagine being reunited with your ex-lover after 20 years – and your job is to kiss them.

That's the premise of Stage Kiss, the thought-provoking comedy written by MacArthur fellow and Pulitzer Prize finalist Sarah Ruhl, that will be presented by the Department of Dance and Theatre at the University of North Texas. Performances take place at 7:30 p.m. March 10, 11, 23, 24, 25 and 2 p.m. March 12 and 26 at the University Theatre, Radio Television Film and Performing Arts Building.

Stage Kiss is about two professional New York City actors -- simply named "He" and "She" -- who first fell passionately in love in their 20s. They parted ways and 20 years later, they're cast in a play opposite each other. Now "She" has a husband and daughter, and "He" has a girlfriend and case of arrested development.

But they feel that spark again.

"It's very clever, very witty, and it offers some interesting insights on the persistence of love," said senior theatre major Christopher Taylor, who plays "He."

Hayes said playwright Ruhl is interested in finding out what is "mature love." Many relationships go through different stages, such as friendship, infatuation, passion and companionship on the way to full compassionate love.

"We all want to love and be loved," Hayes said. "But how does our need for love change and mature?"

The show also features two plays within a play -- one of them a spoof of high style comedies like Private Lives called The Last Kiss and the second play is the even more absurd, contemporary gritty drams I Loved You Before I Killed You, or: Blurry.

Hayes plans to blend the theatrical and musical elements in the staging of the show. The production will use "thrust" staging, so the audience surrounds three sides of the intimate acting area.

"Ms. Ruhl's form of realism includes moments of fantasy, dreams and mysteries – that can often be sung!" Hayes said. "Her theatricality will surprise and fascinate audiences."

Stage Kiss debuted off-Broadway in 2014, and the actors are excited to perform such a new work by the critically acclaimed author.

"The play is hilarious, but what I personally really enjoy about the play is its relatability," said senior theatre major Shayleigh Ward, who plays "She." "Sarah Ruhl's commentary is so universal and so cleverly staged."