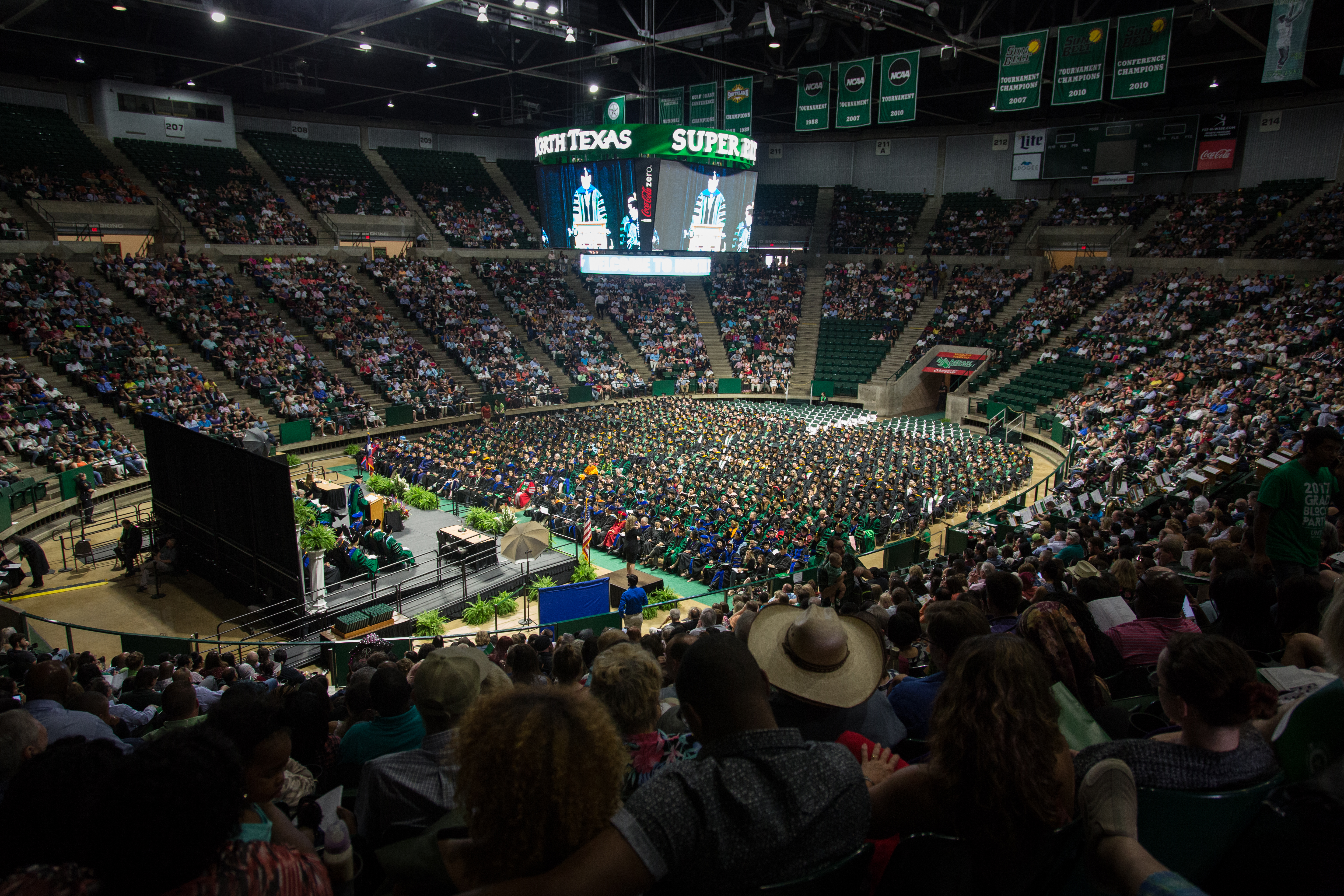 Spring commencement ceremonies will be May 9-11 on the UNT campus.

The ceremonies will be held on the UNT campus in the Coliseum, 600 Avenue D, and in the Murchison Performing Arts Center, 2100 N. I-35 East, in Denton.

See the schedule of individual college ceremonies online. Watch live streams of the ceremonies in the Coliseum and Murchison.

Graduates, their guests and the entire UNT community of current students, faculty and staff also are invited to the Graduation Block Party, an event filled with commemorative giveaways, food trucks, live music, photo ops and fireworks. The party to celebrate the accomplishments of UNT’s newest alumni is from 5:30 to 9 p.m. May 10 (Friday) along Highland Street, on the Union South Lawn and in the Library Mall on the UNT campus. Graduates should bring their tassel and UNT ID to receive a free graduation gift and be entered into giveaway drawings. UNT graduates for the academic year, including summer graduates and fall 2018 graduates, are all welcome to attend.

Commencement story Ideas: For press passes or interviews, contact Heather Noel at Heather.Noel@unt.edu or 940-369-8218. For UNT commencement coverage, stories of interest include:

A century of bachelor’s degrees – The five pioneering students in 1919 received their bachelor’s degrees in education. The four-year degrees represented a turning point for the university, which was founded in 1890 as a teacher training school. Today, UNT is one of the nation’s largest public research universities with 38,000 students who choose from 230 programs — many nationally and internationally recognized — to pursue their goals of becoming teachers, artists, engineers and everything in between.

Mason Bynes is a musician and composer who has overcome great obstacles while at UNT. Just three years ago, she almost gave up on music after a car accident resulted in the loss of two of her fingers. With the help of prosthetics, she’s been able to play piano again and she’s looking forward to a career composing music for films and media. She recently accepted a scholarship to pursue a master’s degree at The Boston Conservatory at Berklee.

Anna McKee was the first woman to win IBM’s collegiate coding contest, Master the Mainframe, last year – and she won it again this year. The information systems and decision sciences major plans to work in the technology industry where she hopes to inspire young women to get into the STEM field.

David Yue made history at UNT’s Texas Academy of Mathematics and Science as the first TAMS student to be named a Truman Scholar finalist. At 18, he’s already been published in peer-reviewed research journals, founded a STEM nonprofit and competed in an international astronomy and astrophysics competition in Beijing.

Stephon Bradberry used faith, family and friends to overcome depression and pursue his degree in integrative studies. He helped reshape the political structure of the Black Student Union as its president and has been a champion for equity and diversity on campus. He plans to start a master’s program in political communication in the fall at American University.