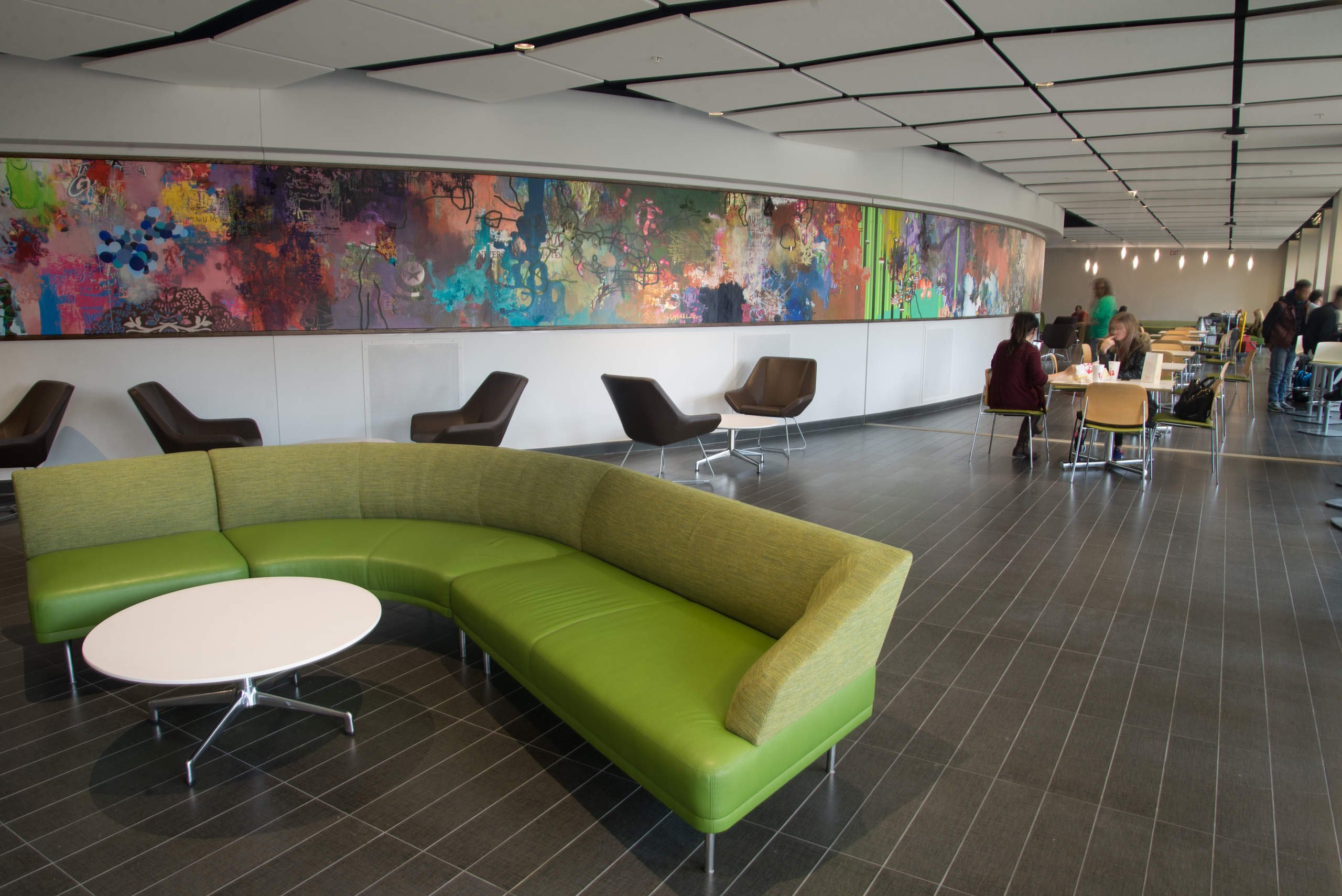 UNT alumna and College of Visual Arts and Design faculty member Murielle White created the mural "Ocean of Possibilites" for the new UNT Union. It hangs in the Campus Chat seating area. Made possible by the UNT Percent for Art Program.

Two commissioned pieces – "Ocean of Possibilities" and "Quiet and Soaring" – were installed Jan. 19 in the union's food court and meditation room, respectively.

More than 300 artists had applied for a commission in spring 2014 from UNT's Art in Public Places program to have their artwork displayed at the union. A selection committee made up of regional art professionals, students, faculty and administrators selected the pieces.

The artwork of alumna and faculty member Murielle White, whose 4-foot by 92-foot mural Ocean of Possibilities reflects the diversity, tradition and sustainability of UNT, is featured on the curved dining room wall of the second floor food court.

"I picked the traits that make UNT stand out and merged it with my own painting style," White explained of the mixed media mural that combines images of UNT with the abstract painting themes she uses in her other artwork.

Originally from Paris, France, White said she easily related to the theme of diversity, which is reflected at the university with a significant international student population, a number of non-traditional students and veterans returning to or entering college for the first time.

Tradition, such as excellence in the College of Music's jazz studies program, and sustainability, such as the Platinum LEED status of Apogee Stadium, also are important to the university, White noted.

"I wanted an art piece that the audience could relate to," she said of weaving in these themes. "I would like people to find a spot they can identify with – not just students and people on campus, but even parents who come to the school not knowing anything about it. I hope it will be inspirational and educational."

The mural uses complex layers to create an element of surprise. The first layer is a digital collage printed on canvas panels. White hand-painted the canvas with acrylic paints to add texture.

As one of two artists picked to create new artwork for the University Union, White said she is honored – and that the commission has special meaning for her.

"UNT has a special place in my heart because I graduated from here," she said. "It's an amazing opportunity to create a public art piece that will be viewed for years to come."

White attended meetings with students who offered her design feedback as she developed the imagery for the work. She said she had received many compliments from the students.

"Students love to see the mural because they daily discover a new area that they have not seen before," she said. "They are immersed into a colorful journey."

Seattle-based artist Norie Sato created "Quiet and Soaring," which features translucent eagle feathers, wings and tail spreading across the glass wall of the fourth floor Meditation Room. The piece embeds the qualities of UNT's mascot -- the feathers and nest-enclosure of the eagle -- while evoking a certain emotion for visitors.

"I would like it to create a sense of calm – so the image is soft, a little abstracted, and the colors are muted, not bright. It's not visually noisy."

With the eagle, she tried to subtly incorporate its characteristics, with the feathers and wings representing freedom.

"It's not meant to be limiting, it's about being in a lot of different kinds of places," she said. "Also the shapes are very beautiful. It's quiet but active at the same time. I think the whole idea of being able to be in that room and being separated from the outside – the outside will be bright, more noisy – this piece will help."

To make the piece, Sato used a process where the image is in between two pieces of glass -- almost like a glass sandwich. The image is printed on film and laminated between the film and glass together.

"It's easy for the university to take care of – it's safe – it's a really great process because it allows for customization," she said. "There's a lot of artistic control."

She added that glass is an interesting material to work with. "Visually it's very light and it seems very fragile but it has a physical strength to it."

Sato visited campus in fall 2014 to meet with students, who told her how they might see themselves in the meditation room. Sato has extensive experience in creating art in public places, including the San Francisco International Airport and the Fort Worth Chisholm Trail Parkway.

"As an artist I like to have my work seen by a lot of people," she said. "And with public art, they don't have to pay money to see it – it's bringing art out to a huge range of people. That's one of the values of public art – people get to see a lot of different types of work and see how art can be part of life."