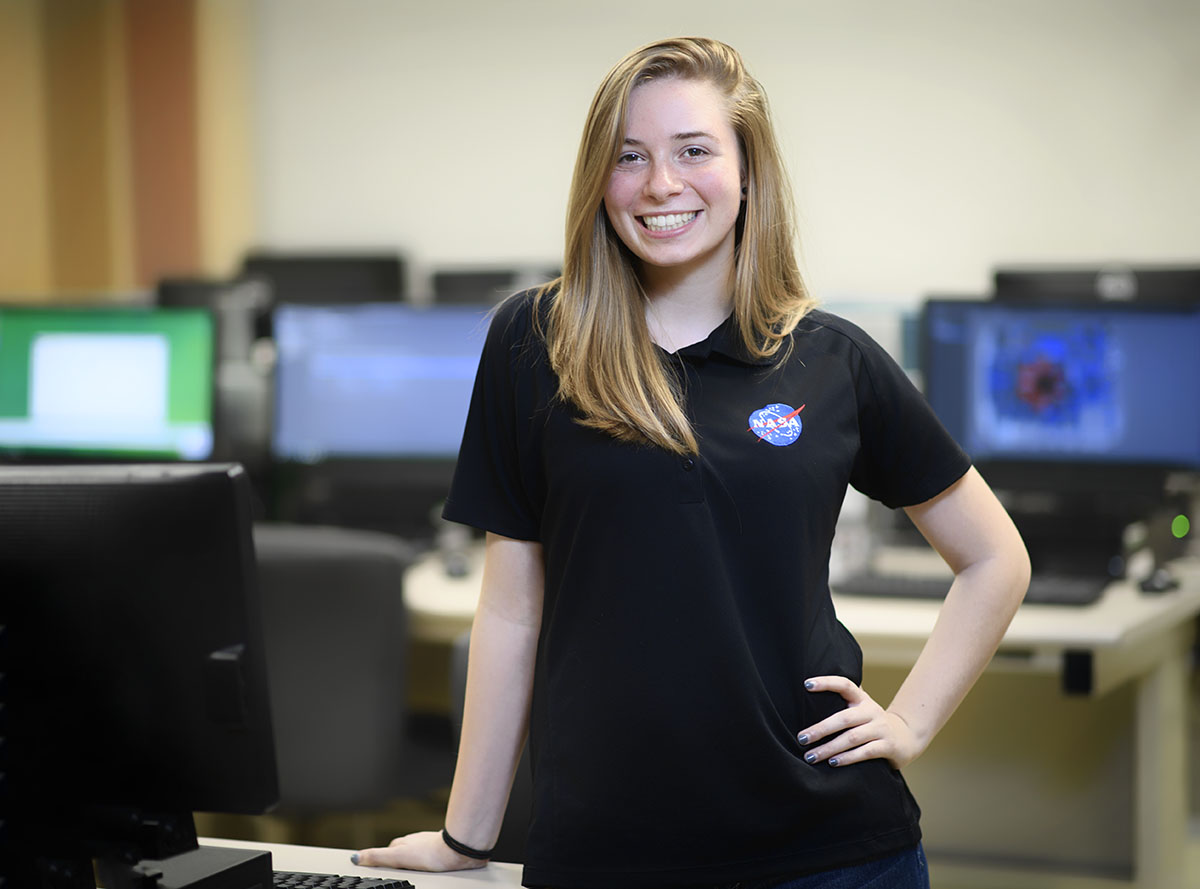 “Whether it’s a printed circuit board that I designed or a giant project like a new robot for the International Space Station, or maybe even a Mars rover I touched in some way,” Novak, an electrical engineering major in UNT’s College of Engineering and Honors College student, says “I want to see my projects travel to space.”

So far, Novak has completed three internships with NASA and, before graduating from UNT, plans to finish three more. This year, she is spending the spring and summer semesters learning more about engineering at NASA’s Johnson Space Center in Houston as a member of the agency’s co-op program.

Even two years later, she still remembers the shock of receiving her first internship.

“I landed my first NASA internship offer via email while on spring break. It was for the summer of 2017 and, at first, I thought it was a fake. I dropped my computer and ran to tell my parents,” says Novak, who first became involved with NASA as a high school student in Hamshire and member of the Texas High School Aerospace Scholars program, through which she was invited to spend a week at the Johnson Space Center. “I knew I was going to take it. It was NASA.”

Novak’s high school experience at the Johnson Space Center is what initially led her to apply for the NASA internship. It was at Johnson where she was able to network with engineers, scientists and computer technicians who told her about internships and co-ops for students. Though she was just a freshman when she received word of her acceptance into the 2017 program at NASA’s Katherine Johnson Independent Verification and Validation Facility — created in response to the 1984 Challenger explosion — she felt prepared for the role thanks to her engineering classes at UNT and the support from those at NASA.

“Up to this point I had taken two C++ programming language classes at UNT and felt that prepared me for the challenge,” says Novak, whose primary responsibility during her internship was to review computer code. “The NASA employees were very nice, and my mentor there was always around to answer my questions.”

Upon her return, she buried herself in her sophomore coursework, including a circuit analysis class with Miguel Acevedo, Regents Professor of electrical engineering, and a class where she learned about the hardware description language VDHL that helped with future NASA internships. Novak completed her second internship in spring 2018 with the Active Response Gravity Offload System at Johnson Space Center, and her third in summer 2018 at the Kennedy Space Center in Florida, where she witnessed the launches of two SpaceX Falcon 9s.

“It was amazing — it was really early in the morning, so my mentors got to the base early and escorted me and about 15 other interns in front of the Vehicle Assembly Building to watch,” says Novak, whose role at the Kennedy Space Center involved writing code for Command and Control Launch Systems. “We could see the launch pad clearly and the colors were so vibrant.”

Novak says the internships have been a wonderful opportunity to get hands-on experience that reinforce her studies.

“I’ve been able to see how the things we learn about in class work in reality instead of in theory,” she says.

Those experiences helped Novak pinpoint her interests. After learning about the details of the Active Response Gravity Offload System project during her 2018 internship at the Johnson Space Center, she realized it was the type of work she wanted to spend the rest of her life doing.

“The system is designed to simulate low-gravity environments,” says Novak, whose determination — which she honed as a UNT student — helped her problem solve during the project, like when she figured out a faulty gear box was the culprit behind a malfunctioning motor. “Getting to work on it was a big deal for me. I was able to get my hands dirty making motors spin. It was fun.”

Novak returned to UNT for the fall 2018 semester, taking 18 credit hours to stay on track to graduate in December 2020. Much of her success, she says, is due to the support she’s received from the College of Engineering, which helped her balance internships and coursework.

“I wouldn’t have been able to do all of this if it wasn’t for my UNT mentor Gayatri Mehta in electrical engineering,” Novak says. “She helped me learn how to earn credit for my internships. I am well on my way to my NASA dream job thanks in large part to the College of Engineering and my UNT family.”