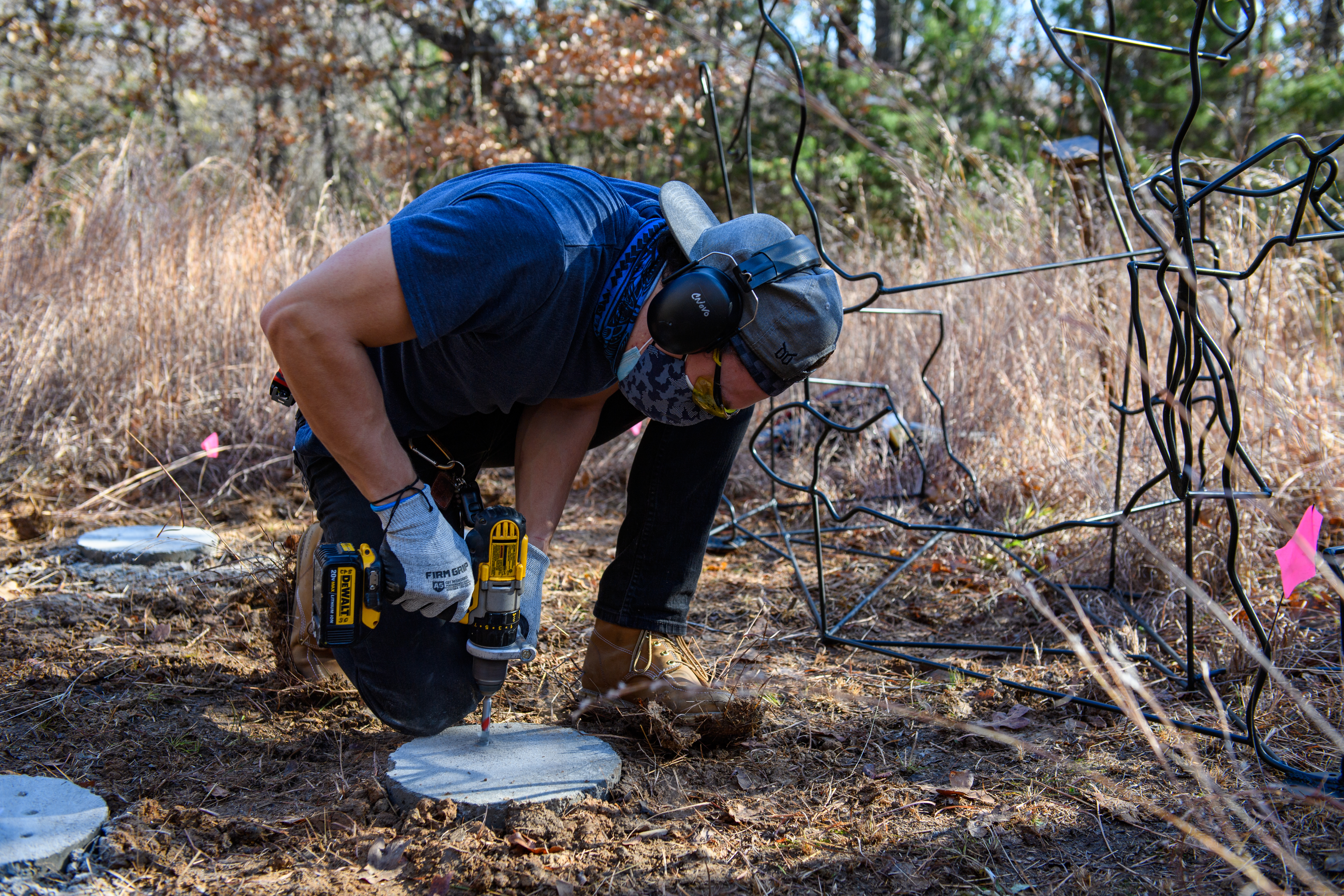 Christopher Novinski has learned a big lesson about sculpture — it takes a lot of problem solving.

The senior studio art major in the University of North Texas College of Visual Arts and Design installed a sculpture at the Lewisville Lake Environmental Learning Area in December. Placing the anamorphic bison among the canopy of trees along LLELA’s Blackjack Trail culminated more than a year’s worth of work.

Before then, he’d never developed an artwork on such a large scale, nor led a project with a community partner.

“It’s been absolutely nerve wracking at times. I really didn’t think that I was going to get this far and receive the opportunity to do this project. It’s been so surreal. It’s wild to think and witness that I’ve installed my first solo public sculpture before I’ve graduated,” Novinski said.

The sculpture began as an assignment in Alicia Eggert’s Fall 2019 Art in Public course. Students were tasked with preparing proposals for a real-life public art project funded by UNT’s The Onstead Institute for the city of Lewisville. Last spring, Novinski learned his proposal was selected by the city’s Arts Advisory Board for temporary installment at LLELA.

“In the time of COVID-19, public art is having a moment because usually it’s in an outdoor space that’s much safer and more assessible for viewing and engagement than an indoor gallery or museum. Public art can pull people in and make them want to go to a place. LLELA is such a special place, and I hope this sculpture will add to its natural beauty and encourage more people to come go on a hike,” said Eggert, an associate professor and coordinator for the sculpture program at UNT.

Along with fellow CVAD students, Novinski spent four months planning and fabricating the piece. There were challenges along the way, such as determining the best way to execute the design into a tangible sculpture and figuring out how to coordinate fabrication time in the middle of a pandemic. But with support from Eggert and his classmates, he persisted.

“I took it one step at a time, and along the way, I learned a lot. I think one of the things I will definitely take away from this is understanding the importance of time management and communication in a professional project. I knew it was important to begin with, but it is a completely different story when you are in the midst of it all,” Novinski said. The large-scale steel sculpture is a present-day reminder of the bison herds that once roamed the North Texas prairies and a nod to LLELA’s mission of restoring the native ecosystems and biodiversity. Novinski designed the sculpture, titled “Hidden,” with an anamorphic perspective so that it’s only visible from one vantage point. Shaped out of steel rod, it easily blends with the natural landscape.

“If you’re looking at it and take a couple steps to your right or left, it will simply disappear, which is exactly what I wanted. Just like the bison came and left, we’re all here at a certain point in time and then we’re gone,” Novinski said.

Eggert makes it her mission to allow her students to apply the skills and concepts learned in class toward real-world projects and exhibitions. She designed her Art in Public course, which debuted in Fall 2019, to introduce students to all aspects of making public art — from the proposal phase all the way through fabrication and installation.

As her inaugural cohort of Art in Public students worked on proposals for the LLELA sculpture, they also executed two sculptures for the city of Denison’s Waterloo Park.

“In the art world, it feels like there is this wall of being able to get opportunities without already having them. Projects like this give our students a leg up. Not only do they learn from the experience in an environment where they have support from faculty and staff, but they get a professional credit they can list on their resume, which will help them as they are seeking job opportunities after they graduate,” Eggert said.

Eggert’s students aren’t the only ones working on public art in the community. Jeffery McClung’s Multiples and Monuments class took on a project for the city of Lewisville as well.

“This was a huge opportunity for the students to get a professional commission like this. They learned you have to be flexible in working with community partners and be able to adapt when unexpected challenges arise,” said McClung, a UNT alum and CVAD visual arts technician who specializes in bronze casting, welding and metal fabrication.

“The city of Lewisville is so pleased with all the works of art created by the CVAD students which are now part of our Public Art collection,” said Denise Helbing, arts center manager for the city of Lewisville. “The students clearly took great care to research each of the projects thoroughly and infused great creativity and skillful design to execute the works. With the instruction, guidance and commitment from both Alicia and Jeff these projects were still able to be completed despite the additional challenges the pandemic introduced to teaching, studio art work and collaborative projects.”

Novinski, who also designed one of the jackrabbit sculptures, said the work has given him practical experience that will help as he starts his career.

“It’s been a fun challenge. I’m not sure exactly what I will do after graduation, but after completing these pieces, I won’t shy away from taking on more site-specific projects in the future,” Novinski said.

“Hidden” by Christopher Novinski is an anamorphic sculpture bent from steel rod depicting a simplified representation of a bison. This piece uses an anamorphic style, meaning the subject of the work is only viewable from a single vantage point, to recall the point in time when bison used to roam the lands that are now Lewisville Lake Environmental Learning Area, 201 E. Jones St. The sculpture can be found about half a mile out from the starting point on the Blackjack Trail at LLELA.

“Cultivator” by Steven Hendrix, portrays the classic Lewisville Farmer that was the high school mascot during the 1940s and 1950s. Wearing traditional denim overalls, “Cultivator” is chewing on a blade of wheat and holding a three-pronged pitchfork upright to symbolize another win for the team. “Cultivator” also features a tractor and is located at the Visitor Information Center, 247 W. Main St. “Hippie” by Lexis Thompson, celebrates the Texas International Pop Festival, a large music festival held in Lewisville on Labor Day weekend of 1969. “Hippie” is dressed in characteristic hippie fashion including bell-bottom jeans and accessories such as a peace-sign necklace and sunglasses. This hippie can be found playing the tambourine near the stage in Wayne Ferguson Plaza, 150 W. Church St.

“The Bandit” by Kaitlin West retells the origin story of the “Fighting Farmer” when high school football players chased down a bank robber fleeing a heist at a bank on Main Street in 1946. In West’s interpretation of the story, the jackrabbit is the bandit with a money bag in hand. Visitors wanting to step into a bit of history can pose alongside the 1940s-era football cleats pursuing the rabbit robber. “The Bandit” is located in South Poydras Plaza on the south side of the 100 block of W. Main Street “running” toward the south just as the real robber ran in 1946. “A Hare’s Sequence: Route 66” by Christopher Novinski, reimagines a television director onsite in Lewisville for the filming of “Love is a Skinny Kid,” an episode of the television drama Route 66 that was filmed in Lewisville in 1962. “A Hare’s Sequence: Route 66” is dressed in an iconic beret-style hat and director’s vest and is positioned behind a vintage movie camera on a tripod. It is located in the same general area as the episode’s opening shot, at the corner of Church and Mill streets.

“Sheriff” by Stephan Abernathy, honors Lewisville’s first night watchman hired in 1927 and all the police officers who have served the city since. “Sheriff” takes on a classically western look in his uniform, including Wrangler-esque jeans, wide-brimmed cowboy hat, five-star badge and holstered pistol at the belt.

“Firefighter” by Wesley Flessner represents Lewisville’s first paid fire marshal, also hired in 1927. It was a series of fires that destroyed Main Street structures in 1895, 1912 and 1918 that prompted the city to incorporate so a fire department could be formed. Flessner’s “Firefighter” can be seen holding a water hose and wearing boots and a vintage-style helmet. The badge number on the firefighter’s helmet is that of Chief Timothy Tittle, Lewisville’s beloved fire chief who passed away in January 2020. Both “Sheriff” and “Firefighter” can be found in front of City Hall, 151 W. Church St., near the historic Old Well House.