Images from Amy Wynia's research of the Magellanic Woodpecker on Navarino Island, Chile 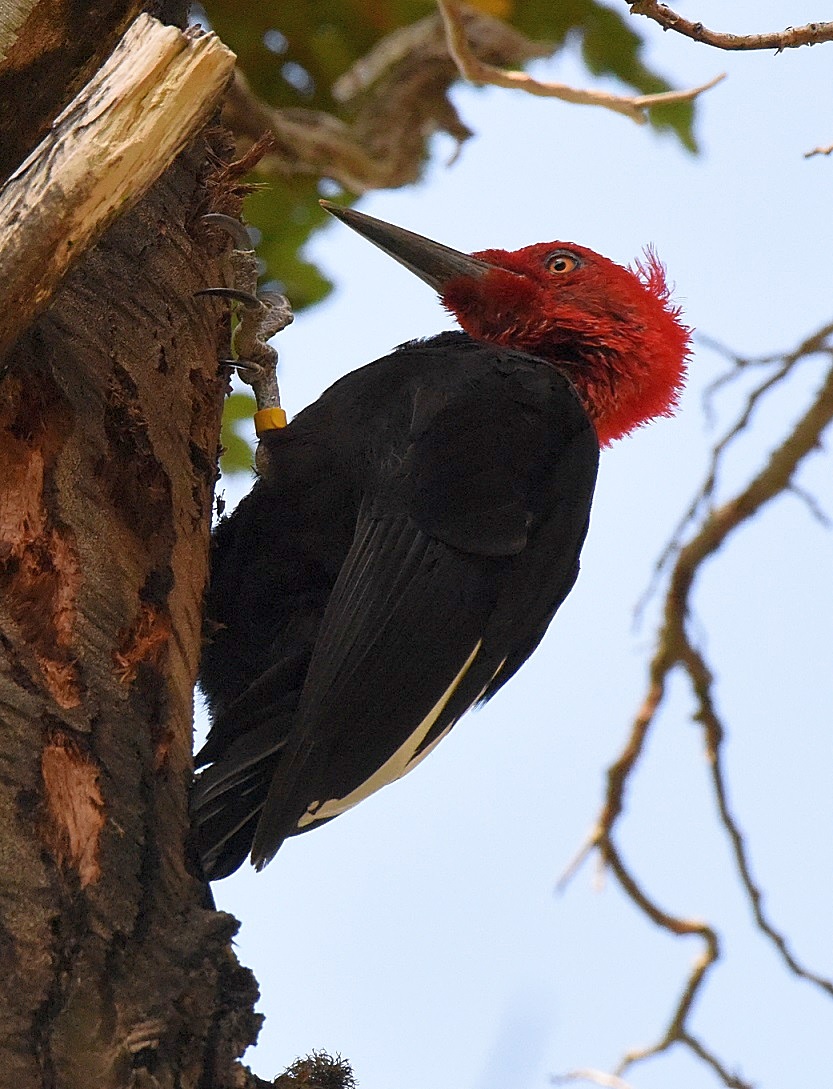 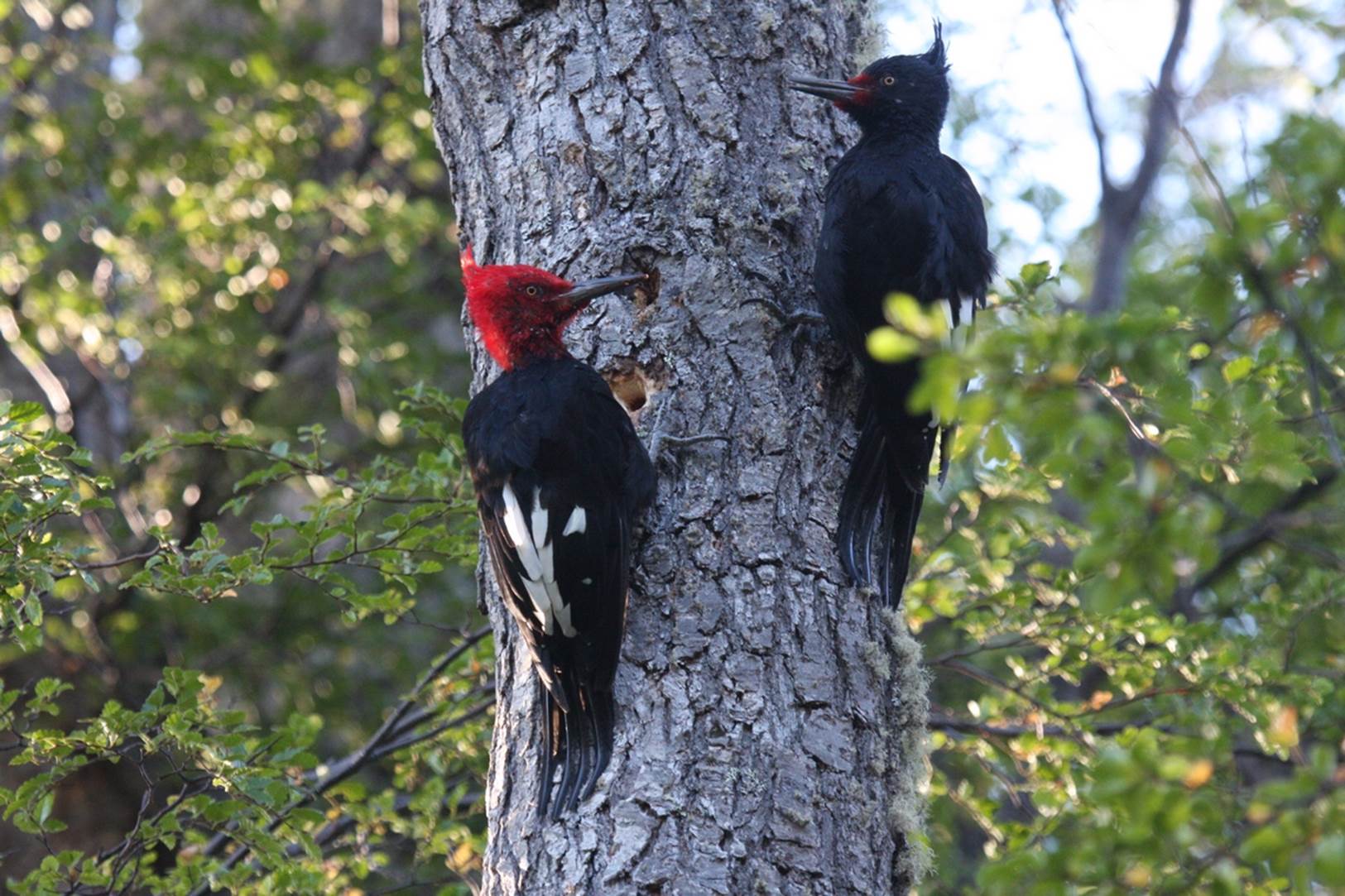 University of North Texas Ph.D. candidate, Amy Wynia, traveled more than 6,000 miles to Navarino Island in southern-most Chile to explore the forests in search of the Magellanic Woodpecker (Campephilus magellanicus), the largest woodpecker in South America. While Wynia went to the ends of the earth to collect information for her Ph.D. dissertation, she also went because she really loves woodpeckers.

“The first time I actually held a woodpecker… that moment of me connecting with that bird in my hand and feeling those stiff tail feathers, it really stuck with me,” said Wynia, a student and researcher in UNT’s Sub-Antarctic Biocultural Conservation Program. “I’ve captured lots of birds in my time but the woodpecker was one bird that just really impressed me.”

Less than 700 miles north of Antarctica, Wynia spent some of her days attempting to detect, capture and band the Campephilus magellanicus to study the bird population. She captured 52 woodpeckers in her time there but said it wasn’t easy.

“We use large, special nets that are specifically designed to safely and humanely capture birds. But, these birds have very sharp bills and claws designed to rend and tear bark. And, as the birds and banding work is too delicate to wear gloves, I often went home bleeding,” she said.

For nearly a year, Wynia’s home was a three-floor field station with up to 23 other people. She lived with other researchers from around the world in a small room with two sets of bunkbeds and one bathroom per floor. She lived in the field station on three separate occasions totaling 11 months. Despite the tight quarters, Wynia said it really was the best place to study the woodpeckers.

The Magellanic Woodpecker lives in families usually consisting of an adult male, female and their offspring. Young woodpeckers will spend up to four years in the family territory before going out, claiming their own territory and starting their own family. Unfortunately, the bird’s population is dwindling, primarily due to habitat loss.

“My woodpeckers make their homes in old growth trees. They literally bore a hole in them to nest. But, those forests they call home are being replaced by cultivated farmland and plantations of non-native trees, such as pine and eucalyptus, to be used as lumber,” Wynia said. “I captured and banded about 52 woodpeckers. I used different colored bands that denote capture year, familial group and individual ID, so I can see them from afar and not have to recapture the birds.”

Wynia is using the data she collected to keep track of the woodpeckers’ family groups, expansion and numbers. The Magellanic Woodpecker is not considered an endangered species globally, but it is listed as endangered and/or threatened in different regions of Chile. Its worldwide conservation status is currently listed as Least Concern, but its populations are decreasing. Wynia hopes to change that with her research, which is why she designed her experiment to determine the best detection technique to establish baseline population estimates with hopes of long-term monitoring to encourage listing of this keystone species.

“The Magellanic Woodpecker needs to get on the global conservation list because if nothing is done, before you know it, it will be gone like its larger relatives, the Imperial (C. imperialis) and Ivory-billed (C. principalis) Woodpeckers.”

Wynia worked closely on this project with her Ph. D. advisor, Jaime Jimenez of UNT’s Advanced Environmental Research Institute. Jimenez travels frequently to Chile to conduct research and says that the university is very supportive of students in the field.

“When students are in the field, be it Chile or elsewhere, we work with them to do everything we can to ensure a successful study,” said Jimenez. “In Amy’s case, she and I sat down and discussed ideas, methods and techniques. I was able to help fund her work so that she could obtain the necessary supplies, room and board, vehicles and technicians. She has done great work in Chile and I hope other students will see her as an example of the opportunities and support available through our Sub-Antarctic Biocultural Conservation Program.”