To fix the future, UNT program turns to the past 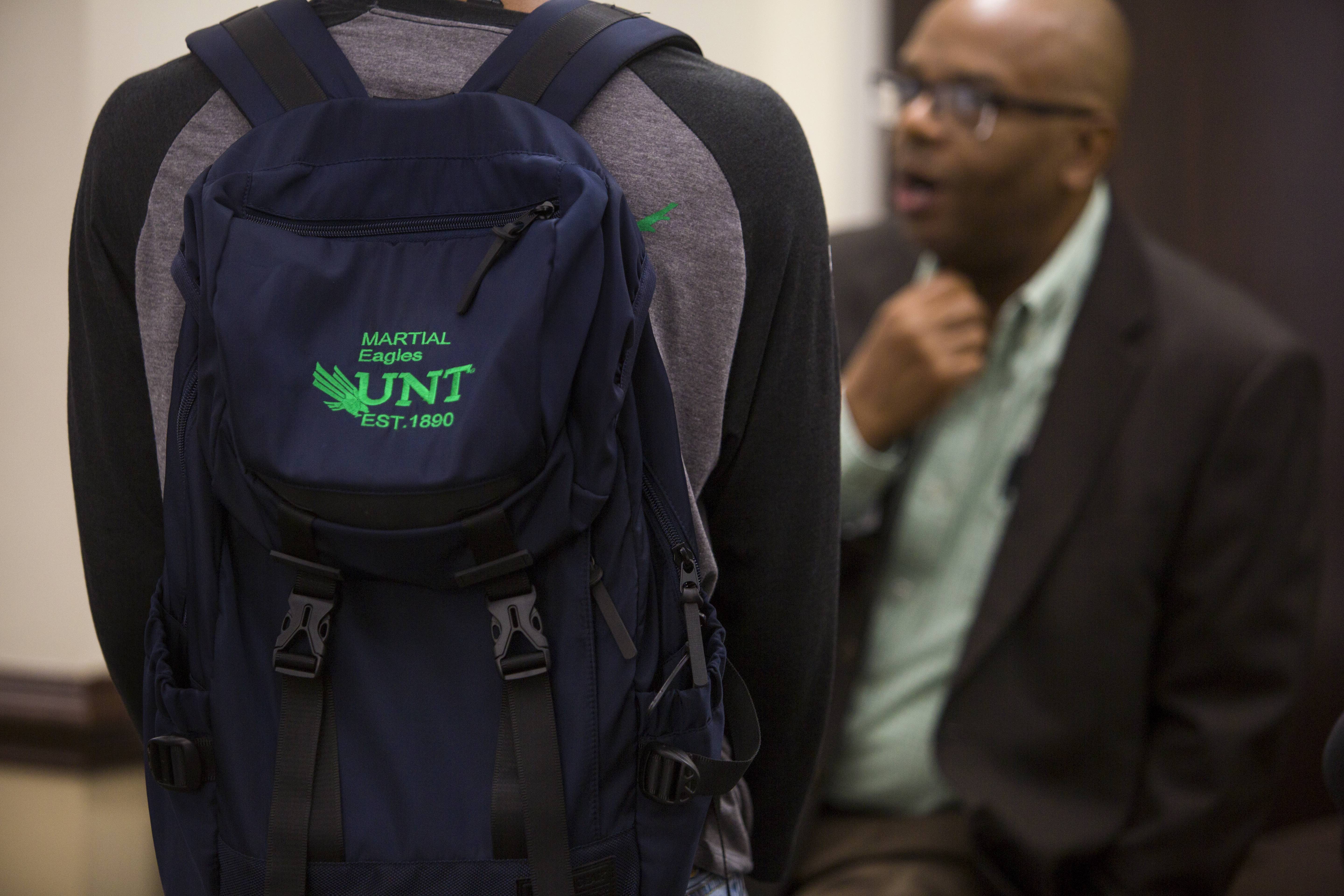 DENTON (UNT), Texas — It’s not uncommon to hear an old slave spiritual or a bit of jazz coming from Harold Woodard’s classroom.

But this is no music class. For Woodard, the music, specifically ranging from the Father of Gospel Music Thomas Dorsey’s “Take My Hand, Precious Lord” to Marvin Gaye’s “What’s Going On” has a purpose: elevate a group that often has the highest risk for dropping out of college.

“When you look at aggregated retention and graduation rates, at the bottom of that list are African American males,” said Woodard, who is the program director for Strategic Retention Initiatives at the University of North Texas.

Nationwide, there are both gender and racial/ethnic gaps in college. As the latest data shows, 67.5 percent of males who recently finished high school enrolled in two- or four-year college, compared with 71.9 percent of women, according to National Center for Education Statistics reports. Of the men who do enroll, they’re less likely to graduate than their female counterparts. And if they’re African American, they’re least likely of all.

However, Woodard hopes to change that statistic through UNT’s MARTIAL Eagles program, which aims to attack the indicators that most affect male student success and retention.

The program – which stands for Male Alliance for a Rigorous, Transformative and Interdisciplinary Approach to Learning – brings together young men, of any ethnicity, who want to learn about the historical and cultural experiences of Black males in the U.S. via the lens of music. Students live together on campus, participate in mandatory study sessions, receive mentoring and are enrolled in a seminar-style class for freshmen. Half of the course teaches them things like effective study habits and how to use on-campus resources. The other half of the course focuses on music. On those days, students learn about how African societies used music to communicate and celebrate life, how those who survived the middle passage used songs to maintain some level of sanity, and how songs played a part in slave resistance during the Antebellum period.

“It is exciting to see UNT continue to grow as a diverse institution as growing numbers of traditionally underrepresented students choose UNT; I think that certainly speaks to the welcoming environment,” she said. “However, the clear gaps in graduation rates when you look at data by gender and race/ethnicity speak to the continued need for programs like this. I believe we can do more to help not only our African American men, but all students to graduate and go on to better our communities worldwide. MARTIAL Eagles is our attempt to do just that with our African American men.”

Harris says the small setting allows them to build relationships with students and to customize any interventions or referrals to fit the needs of the individual student.

Freshman Brevin Beard says he’s never had a class like this.

“They go through African American history through the years and detail how they survived, and sometimes thrived, despite the circumstances they experienced,” said Beard, a student in the College of Business.

It’s through those shared experiences that Woodard connects with students.

“I grew up in a segregated community, and there were a number of experiences that have allowed me to speak to issues and give perspectives about how far we’ve come and how far we have to go,” said Woodard.

While the program is still new, having only launched during the 2017-18 school year, it is proving to be effective.

In its first year, the MARTIAL Eagles cohort outperformed its comparison group. Participants earned an average 2.72 GPA, completed more credit hours and achieved a higher, one-year retention rate than both their African American peers and all male students at UNT.

“This class is not exclusively for African American males,” said Woodard. “It is truly open to any freshman male. Anyone can benefit from exploring this topic because they can learn about resiliency and creativity in the face of sometimes overwhelming oppression of the human spirit. It’s something that can be downright inspirational.”

But for students like Beard, the beauty of the program comes not through the data or even the music, but rather, coming to a better appreciation of self.

“In my personal opinion, most people who discriminate have never really experienced other cultures or put themselves in someone else’s shoes,” said Beard. “However, being able to overcome discrimination starts with us first – looking at ourselves with a higher value. This class gives you a sense of pride knowing that these are my ancestors, and I came from them and if they can battle through adversity, then I can battle through anything.”

In this Q&A, Harold Woodard, program director, and Candi Harris, senior program coordinator of UNT’s MARTIAL Eagles program discuss the initiative that they started in 2017. The UNT Male Alliance for a Rigorous, Transformative and Interdisciplinary Approach to Learning (MARTIAL) is a small community of young men who share an interest in the historical and cultural experiences of African American males in the United States. Students also choose to work towards academic excellence in their chosen fields of study while living, learning, and leading together in Rawlins Hall. Click through the slideshow for more of their answers.