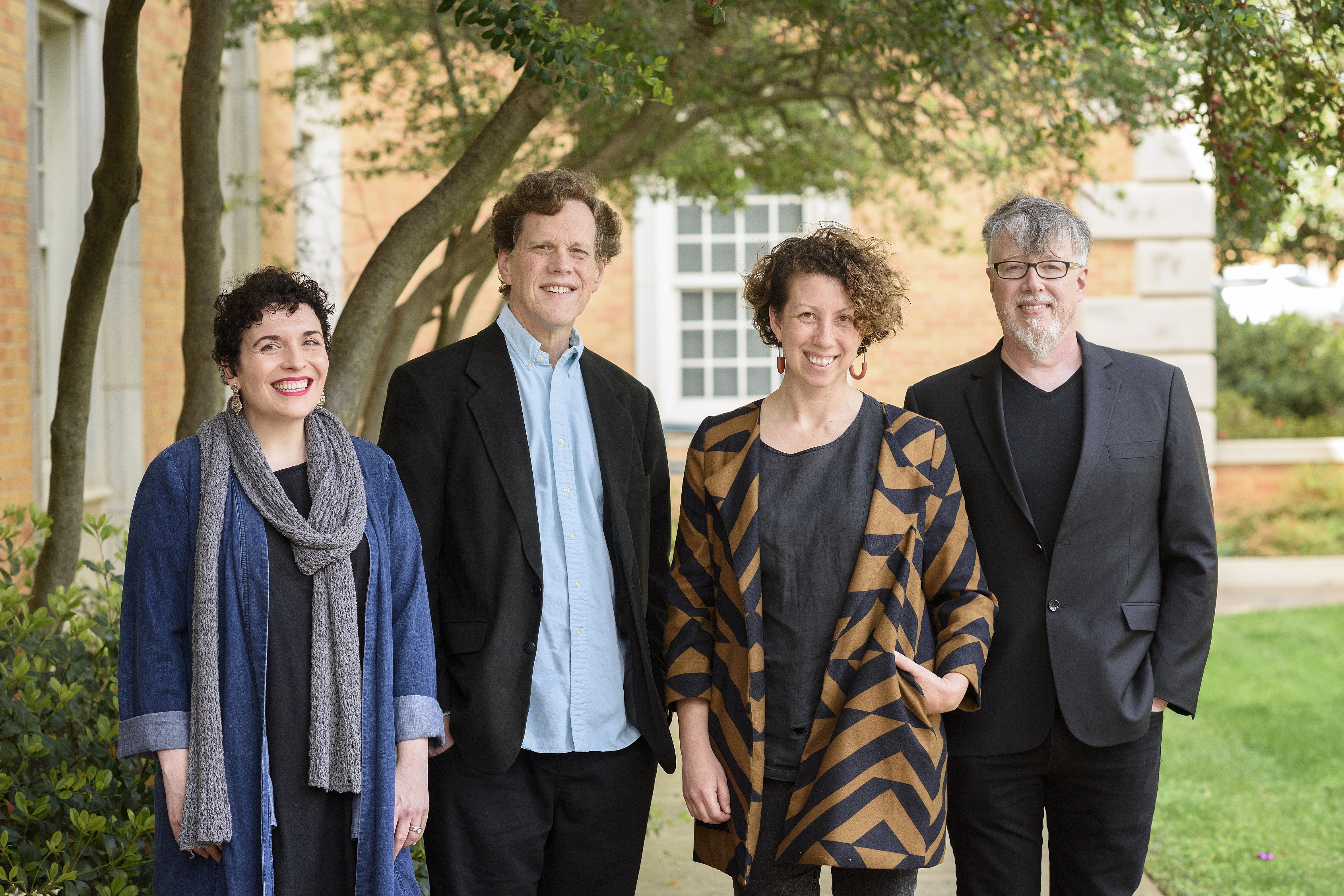 DENTON (UNT), Texas -- Four University of North Texas professors will receive time to work on personal projects – ranging from writing poetry to creating a virtual reality program – after receiving an Institute for the Advancement of the Arts fellowship.
The Faculty Fellows program allows UNT faculty members to take a semester off from teaching to pursue creative research in the arts. The IAA serves to promote artistic and creative expression at UNT.

Bruce Bond, Regents Professor of English
Bond will work on a book-length poem titled “The Calling” that explores the psychology of language and the way it affects people’s personal and political interactions.
He was inspired by philosopher Emmanuel Levinas, who talks about how the human face summons people’s interpretive imaginations. Bond will write about how humans are strangers to each other more than they realize – especially in a world mediated by the internet.
“What concerns me is our contemporary and collective loss of reality or the loss of faith that becoming grounded in reality is even possible,” said Bond, who has been at UNT since 1995.
But Bond, in addition to engaging philosophical questions related to the problems of reading, will also draw from personal experience, such as his wife’s survival from abuse and his father’s struggle with aphasia.
The book reflects a move by Bond, the author of 20 books of poetry, to write longer poems.
“You can break up the long arc of the poem into smaller portions that have an intensity and beauty to them,” he said.

Jehanne Dubrow, associate professor of English
Dubrow will write a collection of poems called “Wild Kingdom,” based on the world of academia. Dubrow, who has written six poetry collections, will draw from her imagination and 10 years in academics, including two years at UNT.
The poems will range from funny to dark. One series of linked poems will be written as scientific field notes, with stock academic characters disguised as birds. Another series will cover honor board hearings, inspired by Dubrow’s seven years of experience on such a board at another university. She had to listen to stories that required her to make tough decisions.
She noted campuses can face great conflicts, and have become screens on to which society projects its anxieties about gender, social class, race and sexuality.
“I think certainly other academics will see their own experiences in the book,” she said. “And because I think these poems are about larger societal issues, they will resonate even with those who are no longer with an academic institution.”

Alicia Eggert, assistant professor of studio art
Eggert will create new work for a solo exhibition in the summer of 2019 at Galeria Fernando Santos in Porto, Portugal.
Eggert, who has won international acclaim for her inventive sculptures, had a small solo exhibition there in the summer of 2017 when she won the Arts of Laguna Prize in 2016. The gallery invited her back for a larger show in its 3,500-square-foot space. During her stay in spring of 2019, she also will work with EcoSteel factory, which specializes in custom window frameworks and art production.
They will collaborate with each other on such works, such as a recreation of her steel sign structure for her neon sign, titled “All the Light You See,” which she put on a vacant building in Philadelphia.
She intends to recreate the sculpture inside of an infinity mirror room and other sculptures.
Eggert, who has been at UNT for four years, feels both excited and intimidated by the opportunity. “That feeling of intimidation propels me to do my best work,” she said.

David Stout, professor of composition and new media and coordinator for the Initiative for Advanced Research in Technology and the Arts
Stout will work on “The Clearing,” the latest piece in a series of hybrid virtual reality installations. This one will come with a twist – he will be creating virtual forms that emit sound and respond to the human voice.
He will use a generative system that creates a 3-D immersive world in real time. This allows different visual forms to emerge and interact with participants, wearing a VR helmet. He hopes to present the work in spring 2019.
Stout, a UNT professor since 2009, is a visual and sonic artist and composer whose work ranges from live cinema performance to electro-acoustic music composition. He was at first reluctant to work with virtual reality because it was trendy. But when he did his first tests, he realized his work was designed for it.
“It’s such a different medium from cinema,” he said. “You’re immersed in a world. It seems very plausible with an architectural scale that is both intimate and ginormous.”