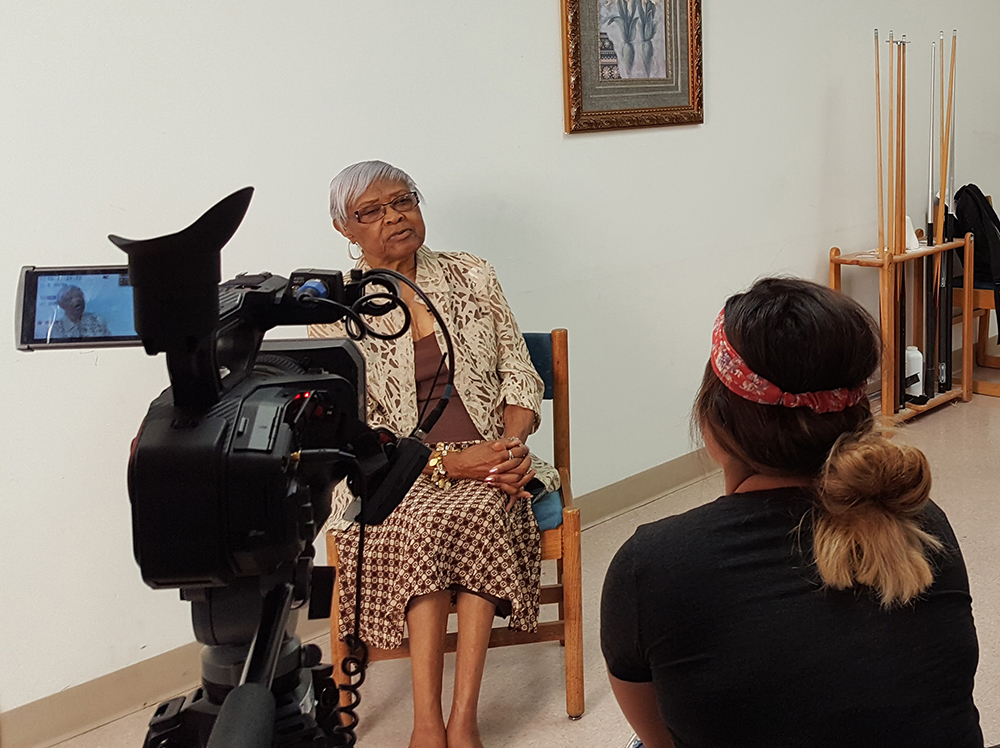 A UNT student interviews Robbie Gober as part of the "Freedman Town 2.0"

University of North Texas lecturer Carla Carter-Bishop found her calling for film as a child while flipping through pages of the book, “Great Black Entertainers: Paper Dolls in Full Color.”

Inside the brightly-covered children’s book, she found images of famous black entertainers such as Dorothy Dandridge, Hattie McDaniel, Paul Robeson and Ethel Waters. – all of whom were accomplished creatives who served as role models for Carter-Bishop’s own career in film.

“Growing up, I was in love with black and white films. I was the 8-year-old sitting at home watching old films from the 20s and 30s,” Carter-Bishop said. “My friends thought we lived in a Blockbuster because we had rows and rows of VHS tapes.”

In college, she majored in cinema studies at the University of Chicago where she explored the background of all those movies she enjoyed as a kid. Then, she switched to the production side earning her master’s degree in film and media arts from Temple University. She founded the organization Focused.Arts.Media.Education. (FAMe) in 2013 to give youth opportunities to create documentary films sparking social change in their communities.

Now a lecturer in UNT’s Department of Media Arts, she is co-creator of UNT’s Youth Media Lab and is working with historically black communities to document their history before it’s lost to gentrification, environmental issues and time.

“I like to go into the communities and teach them so they can tell their stories their own way,” Carter-Bishop said.

Many of these communities sprouted up during the Great Migration (1916-1970), when millions of African Americans left rural Southern states for urban areas in the Northeast, Midwest and West. Their histories have often been overlooked. What little is told are often tales focused on violence and crime or stories that lack first-hand accounts, Carter-Bishop said.

In Denton, Carter-Bishop brought together UNT students and community members for the 2017 interactive video project, “Freedman Town 2.0.”  The project chronicled life in Quakertown, an African American community formed in the late 1800s where Denton’s present-day Quakertown Park is located.

“There aren’t enough films that reflect the everyday beauty and joy of life. In the films that I do, I consciously try to do that,” she said.

Carter-Bishop offered some thoughts on how Hollywood could better portray African American history.

It seems like people of color are getting more representation in Hollywood, but are these roles authentic?

Representation in front of and behind the camera could still use some improvement. A 2018 study examining Hollywood diversity showed that out of 1,223 directors over 11 years, only 4.3 percent were women and 5.2 percent were black. Only four of those directors were black women. Those numbers are bleak and do not represent the faces of the students that I see in my classes. There are all kinds of hashtags and movements right now to rectify this such as #TimesUp and #OscarsSoWhite.

Representation is tricky because there are many ways to represent a group of people, black people are no exception. I think that in order to get more authentic roles and representation in Hollywood, we need more diversity behind the camera to create films that represent the diversity within our culture. I’m at the point where I am getting fatigued of black stories that solely focus on racism, oppression or police brutality. That is not the totality of the black experience, and films should reflect more of a balance.

Are there examples of recent works, where people of color were authentically represented?

With “Black Panther,” they definitely had a great formula and they made something great. I think it resonated worldwide. Ryan Coogler was a genius in putting things in there that resonated with black audiences, giving us something we’d never seen before.

What are some aspects of African American history that need to be focused on more in Hollywood?

A majority of what we’re seeing portrayed of black lives in film is so depressing or negative. In my everyday life, I see so much joy, and my family sees joy.

There aren’t enough films that reflect the everyday beauty and joy of life. In the films that I do, I consciously try to do that.

I noticed that some filmmakers, if they aren’t careful, play into the trope of giving Hollywood what they want which is sometimes that negativity. Sometimes the films that don’t go that path, don’t get the hype or the accolades.

I don’t know if there’s an easy solution to it, but we could definitely see more balance.

If you could do a film on a figure in African American history, who would you pick?

He’s one of the first black filmmakers. He was the first person to produce feature length black films as early as 1918 and made over 40 films about the black experience. He did films in response to “Birth of a Nation,” which showed black people in a negative way. His films were an answer to that showing love, family and perseverance.