DENTON (UNT), Texas – U.S. News and World Report recently ranked several University of North Texas graduate school programs as some of the finest in the nation. In all, seven UNT graduate programs made the top 50 list for 2017 Best Graduate Schools. Among those with high rankings are: 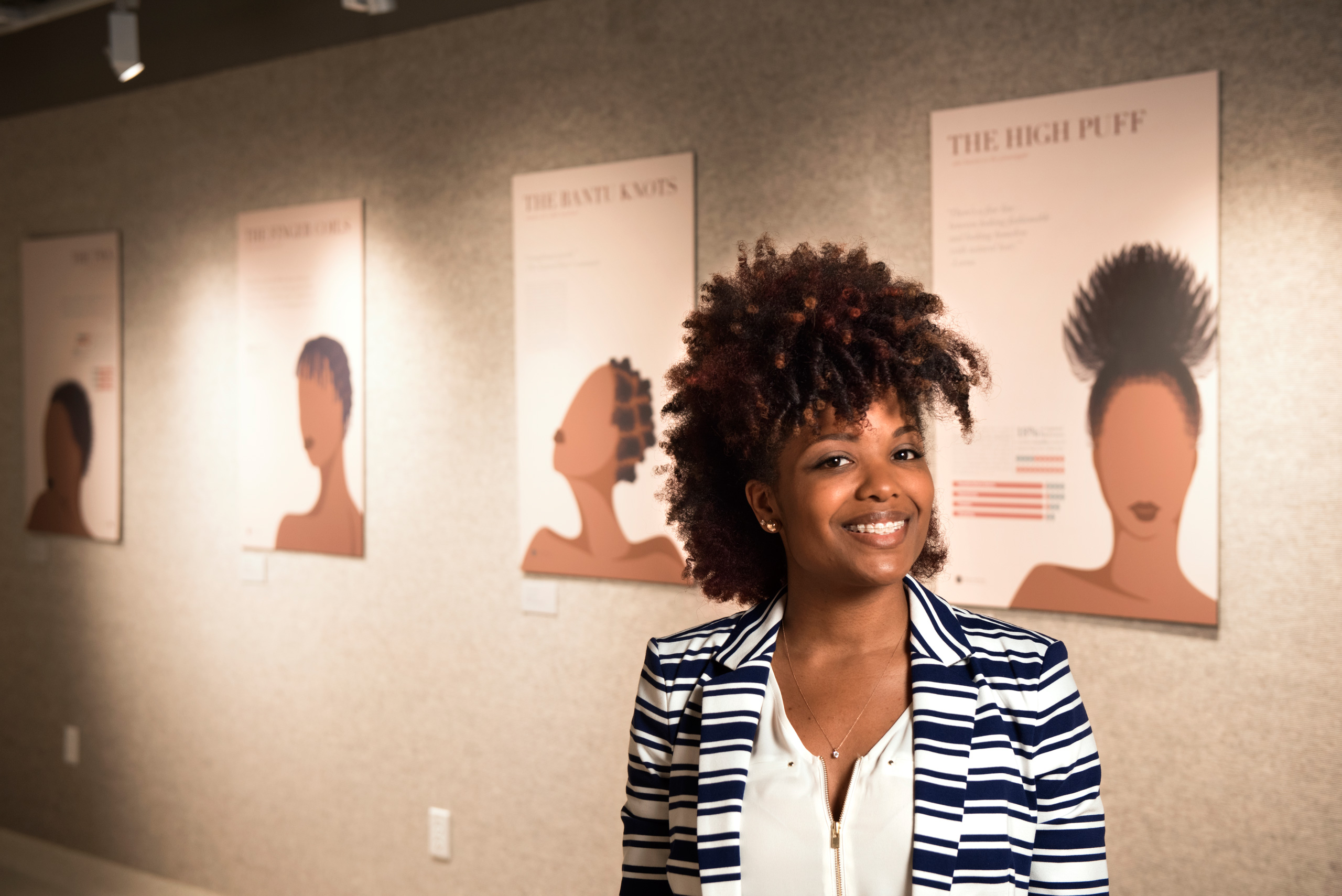 DENTON (UNT), Texas -- Terresa Hardaway, a graduate in the design research MFA program at the University of North Texas, took on a thesis project that affected her personally and other African American women personally – her hair.

Hardaway conducted interviews with more than 100 African American women over the course of roughly two years about the social and cultural significance of their hair as more of them to choose to stop chemically relaxing their hair and go natural. The result is "...

Lisa Mercer developed Operation Compass with the goal of compiling a database that will automatically collect and sort the incidents.

The Dallas-based non-profit organization Mosaic Family Services will soon begin using the app to allow the general public to...

DENTON (UNT), Texas — A team of University of North Texas students ousted more than 450 groups and captured the second place prize in the TD Ameritrade, Inc.-sponsored thinkorswim Challenge, a trading competition that challenges collegiate teams nationwide to grow their virtual stock portfolio to the max. The UNT team, SoSig, increased its portfolio by 129.02 percent, creating a final portfolio value of $1,145,078.73 at the end of four weeks of trading....

What: The University of North Texas' first 3MT®, or Three Minute Thesis, competition. Nine UNT doctoral students will each have three minutes to summarize their research methods and results of their dissertations, and discuss the significance of the results. First place, runner up and people's choice winners will receive cash prizes.

From Tehran to Denton: UNT librarian works her way back up the ladder

DENTON (UNT), Texas -- Seti Keshmiripour, the new outreach and engagement librarian at the University of North Texas, faced a tough decision when she and her husband moved from Iran to Denton in 2011.

Even though she had been a head librarian at one of Iran's most prestigious research libraries in Tehran for five years and had earned a master's degree in library studies in Iran, none of her licenses were accredited in the U.S.

She could either go through a master's program again, slowly working her way back up the ladder, or she could direct...

DENTON (UNT), Texas -- Gulin "Eva" Gelogullari, a graduate student at the University of North Texas, has received a $30,500 Rotary Global Grant to study at Tel Aviv University in Israel during the 2015-16 academic year.

Gelogullari, a master's student in UNT's Department of Media Arts, will use her grant to enroll in Tel Aviv University's one-year...

DENTON (UNT), Texas -- Emmanuela Akosua Opoku, a doctoral student in the University of North Texas' Department of Philosophy and Religion Studies, has been awarded a $5,000 P.E.O., or Philanthropic Educational Organization, International Peace Scholarship. Seven UNT students have received the scholarship since 2002.

Opoku, a native of Ghana, entered UNT in the 2014 fall semester to enroll in the doctoral program in environmental ethics and philosophy....

DENTON (UNT), Texas -- Bob Mong, editor emeritus of the Dallas Morning News who held many roles at the newspaper during 36 years, will receive the C.E. "Pop" Shuford Hall of Honor Award from the University of North Texas' Frank W. and Sue Mayborn School of Journalism.

The Shuford Hall of Honor Award recognizes individuals for professional and educational lifetime achievement and distinguished contributions to the journalism profession. The award is named for the faculty member...